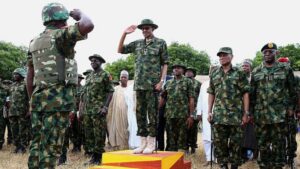 The federal government has intensified peace efforts in the Niger Delta as the Interim Administrator of the Presidential Amnesty Programme (PAP), Col. Milland Dikio (rtd), visited Gbaramatu on Monday as part of his “back to the region tour.”

Dikio visited the Pere of Gbaramatu, His Royal Majesty, Ogboro Gbaraun II Aketekpe, and other key stakeholders of the kingdom in the company of the Speaker of the Bayelsa State House of Assembly, Rt.Hon. Abraham Ingobere, and top officials of the PAP.

He reiterated the federal government’s commitment to the sustenance of peace in the region and said: “My visit today to your kingdom is in continuation of my tour to the region. I am here today to underscore the importance of the traditional institution to peace building and the mitigation of conflicts. We want to partner with the traditional institution to ensure the sustenance peace in our region.”

In his response, the Pere of Gbaranmatu Kingdom commended the interim administrator for the visit and assured him of the support of his kingdom to enable the PAP to deliver on its mandate of securing peace and development within the kingdom.

The monarch sought the support of the PAP’s helmsman to help improve the lot of the people of Gbaranmatu Kingdom through the provision of skill acquisition, employment and other opportunities.

He lamented that his kingdom has suffered terribly over the years from what he described as “failed and empty promises” from the federal government and stressed that the unfulfilled promises have made Gbaranmatu to become synonymous with crises arising from youth restiveness.

He said: “Traditional rulers are the people that can help to maintain the peace of the region but if help is not forthcoming or promises are not fulfilled by the government, there is nothing they as traditional rulers can do to stop the people from reacting negatively, which may lead to the disruption of peace in the region.”