Exclusive : The Es and Policies of Governance and leadership by Governor David 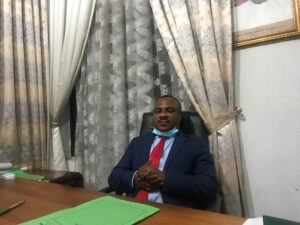 A team of Nigerians in the Diaspora visited Ebonyi State as part of its continuous State visit to the South East States in Nigeria as a follow up to the launch of the Igbo Presidency Global Movement 2023 which was formally launched on Monday 5th of Oct. 2020, in Awka, Anambra State.

The team led by the President General of Ohaneze Ndigbo in the United Kingdom and Ireland, Dr Elias Nnanna Igwe Supported by the Vice President Abia State Indigene, Mazi Azu Godson who also doubles as the Welfare Executive of Nigerians In Diaspora UK and Ire, paid a visit to the Ebonyi State Honorable Commissioner for Information and orientation, Hon Barr Orji Uchenna Orji. Others in the entourage included
 Chairman/CEO of BEN Television London, Mentoring Cmdt Alistair.

The Commissioner who welcomed the team in the state presented the achievements of his principal the Governor, Engr David Umahi in the last five years of leadership especially in the area Infrastructural Development, Social and Economic Interventions.

According to him, “the Governor of Ebonyi state has three E’s of leadership, he has exposure, experience and education and what drives these three elements of leadership is passion. In the area of exposure, I can tell you in china, we were there for twenty days, we were moving in a train and the governor was watching the development – the rate of development in china and all of a sudden he began to pray and speak in tongues. I saw my governor talking in tongues, all I was hearing from him was God enable me to develop Ebonyi state to be like china and all of a sudden I went into tears, that a governor will be having this kind of passion for his people and so what he does is that everyday he travels, he comes home to replicate what he sees outside the country. I told myself this is rare, unlike the leaders we have in Nigeria. They will travel just to go deposit their money and come back, but he goes to see what people are doing over there and comes back to replicate it at home.

He saw in the United states of America a concept of road construction we call concrete pavement. That was a few months after he was inaugurated or sworn in as governor, and he resolved that the concept roads in Ebonyi should be road construction by concrete pavement which lasts for fifty years
The governor came back and started doing this in the whole of thirteen local government areas, he did twenty-five kilometers road with cornet pavements and you know what that means.
More than ninety percent of our streets in the metropolis have been done with the concrete pavement road.
The governor feels that issue of beautiful metropolis capital city will attract creative industries, so the governor begins to do things differently in the satellite towns and in the LGA. He started by doing flyovers and the kind of flyovers he’s doing is not the kind in Anambra or Enugu States. I think it is the only Anambra in the South East that has about three flyovers. Out of those three flyovers we cannot have heavy trucks pass them but we have twelve flyovers in Ebonyi State that are being constructed, five have been completed, a minimum of twenty-three span flyover and the most beautiful flyover in Nigeria. We also have the highest number of flyover outside Lagos and Abuja amongst the thirty-six sate of the federation. Ebonyi is the lest state in the country on the area of federal allocations, but is building the highest number of flyovers in modern day Nigeria
 
This bridges in Ebonyi helps to resolves all the traffic conflicts, making sure that investment and investors will have no issues about moving around in the state.

Then talking about industrialization.
Dualizing each of these thirteen number flyovers for at least twenty-three (23) kilometers each. Beyond this, the governor thinks we should have things that will beautify the state like water fountains. He raised about thirteen water fountains. In Lagos you cannot see the kind of water fountains we have in Ebonyi State”.
He further said “The fountain is the biggest in Africa, a beauty to behold. It is a place of tourism, and you can all go see it for yourselves. The governor felt that there should be something unique about the state.
The governor thinks that development is twin based, we have the physical infrastructure and the human infrastructure. He combines these two things at the same time. The governor sees infrastructure as a very critical thing. Environment is critical, the human development is also very critical because it is the human infrastructure that drives the physical infrastructure and he began to do things differently in the area of empowerment.
The governor understood the situation that we previously had the highest number of hawkers among the cities of Nigeria and resolved to change the narrative. He went to Lagos and got the idea of Street to Skill empowerment programme. The idea of this street to skill empowerment programme is to really look at hawkers on the street, take them away and give them skills through capacity building, training and retraining technicians, entrepreneurship and vocational programmes in their choice of training. He also resolved to empower each with two hundred and fifty thousand naira with expenses on the project totaling about one hundred and thirty million naira.

The money is granted free of charge. Those within the shores of the state said they have to be empowered. The governor had to get stakeholders to get poor youths, women and widows that are undergraduates to go into vocational programmes on entrepreneurship in which they were trained. There were about three thousand persons given the same amount of money – two hundred and fifty thousand naira each, totaling about seven hundred and fifty million naira.

He went for a meeting in Anambra and saw some Ebonyians into wheel barrow pushing, some professing IPOB so strongly. The governor assembled them and asked them to identify trades. In the end it was concluded that tri-cycles should be bought and given to them. The governor aggregated a total of four hundred youths and women. One hundred and forty (140) persons in Onitsha and two hundred and sixty persons (260) within the shores of the state. He also looks out for the wheelbarrow pushers, bike riders and the repentant IPOB agitators to get something doing. This is because joblessness causes a lot of things and lots agitations is not good therefore negotiation is best. The best thing to do is not to war but to dialogue.

He got the tri-cycles from a company called TVS, an Indian tricycle company in Lagos and gave it out as a grant (free of charge) while an undisclosed state in the north that got this same tricycle the same day with them gave theirs as a facility to be paid under three years with interest”.

The Commissioner further stated that the Governor ensured that not less than ninety percent of the streets of the metropolis and the satellite towns have streetlights and I can say the ingenuity that he adopted makes it possible that no sabotage at all has happened. If there is any case of spoilt bulb, the next minute it is changed, that is really something we need to appreciate about the governor. Of course, that is what he used to beautify all the flyovers, when you go you will see beautiful lighting system and that has encouraged night trade, nightlife and that has reduced drastically the case of insecurity. I can tell you that Ebonyi state has the safest security profile among the states of the federation. 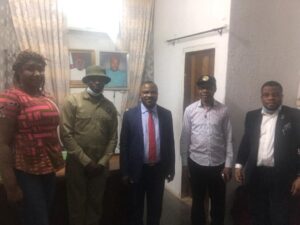 As a commissioner, I drive myself, I walk through the streets, I mingle with the ordinary persons like me, just like what we see in the United States where a president will walk round, go to buy something in the market, that is what happens here. If the governor is passing, they will be hailing. Why? Because he has really done the yearnings of the people. Before he came into office, he was prepared by God. He moved round the communities as a dedicated deputy governor and so he knows where it pinches. He had to track and tackle aggressively issues like our deficits in infrastructure, our human capital deficits and other issues. Before Sir, we had issues of inferiority complex. I will not shy away from mentioning that but today if there is anything like superiority complex we have it. We can boldly tell you that we have come off age.

We are not canvassing for separatism or for cessation. I am speaking as commissioner for information. We are canvassing for a united Nigeria where there will be love, an egalitarian society where things will be done the way they should be done and that is the prayer of the people of Ebonyi state. So we don’t belong to those that are saying we must be Biafra. No, because we believe that one day the dreams of our founding fathers will be realized. I watched the inaugural speech of late President, Sir Dr Nnamdi Azikiwe and I was shedding tears. How passionate the man was about a United Nation. When he spoke he invited Sir Tafawa Balewa, he invited Awolowo, he invited Ahmadu Bello, he said let us build Nigeria of our choice and I believe that the dream should not be allowed to quench for reasons of provocation or marginalization. We must get there. God is in control of this country, I assure you and that is the way to go. I strongly believe that because there is strength in numbers. There is strength in this nation called Nigeria, if we can continue to be together in unity and in love and that is the dream and the passion of our governor. That is why we feel that our governor is really an exporting material, he is not a local material. He is a man that we need to study. I call him an institution, the governor is an institution. If you want to talk about the area of passion, you will continue to study him and you will never get it. All the things that we have done in Ebonyi state as a government, they are his brainchild. He conceptualizes them. He tells you commissioner look at the way it should be done and so we are striving, running to take five percent of his ideas. His ideas are germane and his ideas are perfect. Of course, he is a man of creativity. His creative ingenuity is second to none. It has no part two. It only has part one and so these are the issues about Ebony state and our governor. I don’t need to bore you further. If I need to, I can just select one other sector and tell you. Thank you and God bless you he said.” 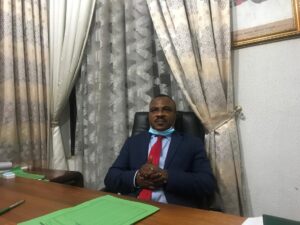