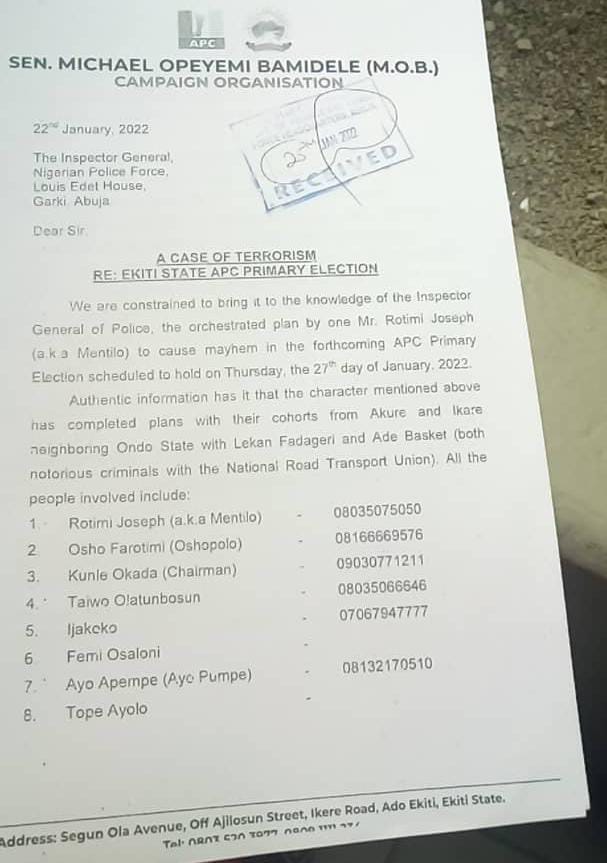 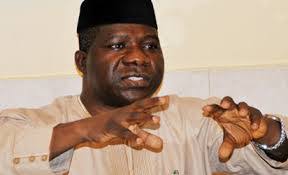 As the June 18 2022 Gubernatorial Elections Draws Closer with political parties organising their party primaries for the election, The Campaign Organization of Sen. Michael Opeyemi Bamidele a frontline contender for the Ekiti state Government House, has petitioned the Inspector General of Police, (IGP) , Usman Alkali Baba over an alleged plan by some political elements to cause mayhem in Ekiti State ahead of the forthcoming gubernatorial primary schedule to hold on Thursday, 27th January, 2022.

In a petition signed by Prince Akin Olayisade, the Director General of Opeyemi Bamidele’s Campaign Organization, The organisation alleged that one of the governorship aspirants had instructed one Mr. Rotimi Joseph (aka Mentilo) to unleash violent attacks on some APC leaders and members by making life unbearable for them to enable the criminal elements to perpetrate the manipulation of the guber primary in favour of their preferred candidate. 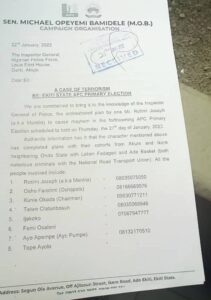 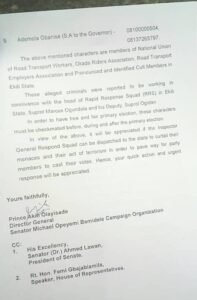 The Campaign Organization accused Rotimi Joseph of perfected plans in connivance with the Head of the Police Rapid Response Squad (RRS) in Ekiti State, Marcus Ogundola a Superintendent of Police and his Deputy, Supol Ogidan of joining forces with the criminal elements to disturb the peaceful conduct of the party primaries..

The Petition dated January 22 and received in IGP office on January 25 reads, ” We are constrained to bring to the knowledge of the Inspector General of Police , the orchestrated plan by one Mr. Rotimi Joseph (a.k.a Mentilo) to cause mayhem in the forthcoming APC primary Election scheduled to hold on Thursday, the 27th of January 2022.

” Authentic information has it that the some characters have concluded plans with their cohort in Akure and Ikare neighboring Ondo state with Lekan Fadegeri and Ade Basket (both notorious criminals with the National Road Transport Union).

” The alleged criminals were reported working in Connivance with the head of Rapid Response Squad (RRS) in Ekiti state Suprol Marcus Ogundola and his Deputy, Suprol Ogidan.