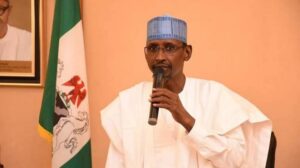 The Nigeria Federal Capital Territory Administration in it’s Effort to make sure that Business withing the Nation’s Capital does not go underground these trying times, the Minister of FCT, Malam Muhammad Bello, has approved waiver on signage for business interests within the territory.

Mallam Bello who announced this at the official flag-off of the bills distribution ceremony and road show organised by the Department of Outdoor Advertisement and Signage (DOAS) of the Federal Capital Territory Administration (FCTA) said this will further cushion the effect of covid-19 pandemic for businesses.

The minister who was represented by the Permanent Secretary, Adesola Olusade, said the decision became imperative following the economic downturn in the country occasioned by COVID-19 pandemic.

Bello said “as part of support for the Small and Medium Scale Enterprises that are needed to catalyse the growth and the development of FCT. We have granted waiver to enterprises that have their signage and billboard on their walls to enable them benefit from some of the concession of government for this period of COVID-19.

“It’s a gesture of government to ensure that non-monetary palliative of COVID-19 gets to everyone. It will enable the beneficiaries plough back the revenue that would have been paid to government into their businesses.”

He also called on the Area Councils to support DOAS effort towards revenue generation, noting that it will serve the interests of all.

“There has been some misunderstanding on the revenue generation effort between the FCT Administration and its Area Council. Some of their agitation are rightly explained. We have explained to them that when we work together, there’ll be greater benefit for all of all. We want them to corporate with the arrangement of DOAS, work with them, then we’ll see the benefits that all of us will have.

“When this efforts is supported much can be accomplished and it will be in the benefit of all. The internally generated revenue of FCT is shared among all tiers of government Inthe territory, so I appeal to them to corporate with these arrangements for the greater growth of everyone.” Bello said

On his part, the DOAS Director, Baba-gana Adam, said although, the new policy has taken over 60per cent of its revenue, but about humanity and recognising that we are under a pandemic and people needs to be supported so that their business can strive.

He also explained that the Administration has extended waiver to Mobile advertisement and large billboards on the streets.

“We have given about 30per cent discount for those with bigger billboards because for the period April, May and June, there was a total lockdown, so when we are billing for the big sign board (third-party), we have deducted a whole quarter.

“As for banks and other key institutions in Abuja, we have also given the 50per cent discount.”