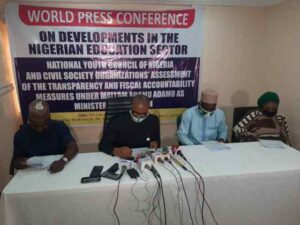 The National Youth Council of Nigeria (NYCN), has debunked claims that the Economic and Financial Crimes Commission (EFCC) or any of the anti-graft agencies has invited the Minister of Education, Malam Adamu Adamu over any allegation bothering on corruption in the Ministry or its parastatals.

It therefore condemned publications in some section of the media alleging probes and contract scam involving the Minister, Adamu Adamu.

Addressing Journalists in Abuja on Friday, the President of NYCN, Solomon Adodo said his organisation after meeting with the Global Initiative for Mass Education, Civil Society Advocacy Groups for Accountability and Probity and others, arrived at the conclusion that the online media publications, with the headlines, “EFCC probes Education Minister, Adamu over contract scam” is totally false

Adodo said; “The recent libelous publication by 247ureports.com and misleading headlines by Sahara Reporters alongside some yellow journalism platforms targeted at roping a scandal around the neck of Mallam Adamu Adamu is one in which all true patriots and stakeholders in the education sector must condemn totally.

“Is therefore with utmost dismay that the National Youth Council of Nigeria and her partners have noted the desperate attempts to disparage the image of the Minister of Education and derail the spate of progress being recorded in the education sector all in a bid to paint the government of President Muhammadu Buhari in bad light”.

Adodo said that the NYCN and Civil Society partners carried out due investigation on the issue, adding that the attack is not only geared at crippling the recovery of the education sector, but also a subtle smear strategy against the government”

Commenting on the financial efficiency, prudence and fiscal transparency, Adodo said that the Ministry of Education has performed well, citing the over N10billion remitted by the Joint Admissions and Matriculation Board to the Federal Government between 2016 and 2020.

The NYCN therefore urged the Minister of Education to remain focused in his duty of transforming the education sector.

SaharaReporters and 247Ureporters reported that the Economic and Financial Crimes Commission had commenced investigation on the Minister of Education, Adamu Adamu, and some ministry officials over a contract scam which borders on the construction of perimeter fencing at the Federal University, Gusau, Zamfara State.

The online publications also reflected that the EFCC has also detained the University’s Vice-Chancellor, Prof Magaji Garba, who had was indicted in the contract scam.