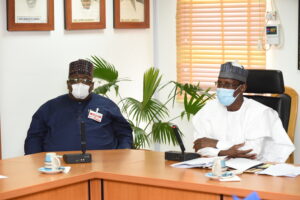 In his bid to rid the Federal Capital City of unwanted development and illegal structures, The Honourable Minister of the FCT Malam Muhammad Musa Bello has charged political and community leaders in the FCT to cooperate with the Administration for the overall development of the Territory.

According to a statement by the  chief press Secretary Anthony Ogunleye, the Minister said “dialogue and sensitization, community engagement of traditional, religious, indigenous communities as well as the Area Council political leadership and overall information dissemination are solutions to community issues.”
Continuing, the minister said “I assure you as advised, the relevant Departments will make sure that what happened doesn’t  happen  in the way it happened” He said that this particular case was inherited and that demolition was always the very last resort.

Malam Bello however called on his guests not to shy away from reality as there were a number of pending projects that will require the cooperation of the communities to ensure success and the overall development of the FCT.

The Minister said that as an advocate of community integration and urban renewal where urban development is implemented around indigenous communities, development will require the cooperation of those communities.

He decried situations where community heads are refusing to cooperate with the Administration for the development of certain areas within the FCT. He reminded the leaders that the development of towns and cities take years and could not be accomplished within short periods of time. 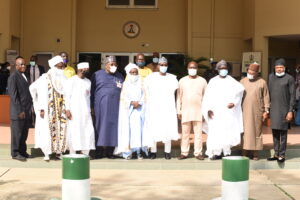 Malam Bello used the medium to encouraged community leaders who had been relocated and resettled to move to the new locations as this will encourage the community members to follow suit, adding that, community heads should show leadership and lead by example.

Earlier in his remarks Senator Philip Aduda said that the delegation was in the FCTA to register concern over the removal of illegal structures in the affected communities within the Abuja Municipal Area Council. He said that in future , before such exercises are carried out, enough notice and time should be given to the affected communities to forestall any hardship.

Also Speaking in the same vein were House of Representative member, Micha Jiba representing the AMAC Bwari Federal Constituency, the Executive Chairman of the Abuja Municipal Area Council, Adamu  Abdullahi Candido, the Sapeyi of Garki,  HRH Usman Ngakupi, and other members of the delegation.

Those that attended the meeting were the Permanent Secretary, FCTA, Sir Chinyeaka Ohaa, the Executive Secretary FCDA, Engr Umar Gambo Jibrin, and the Director of Security, FCTA, Mr. Adamu Gwary.