CBN keeps MPR at 11.5%, others despite rising inflammation 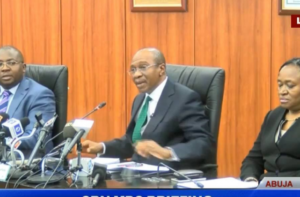 The Monetary Policy Committee (MPC) of the Central Bank of Nigeria (CBN) on Monday, retained Monetary Policy Rates (MPR) at 11.5 per cent despite growing inflationary pressure in the economy.

The Committee also kept asymmetric corridor of +100/-700 basis points around the MPR, Cash Reserve Ratio (CRR} at 27.5 per cent, while Liquidity Ratio was also kept at 30 per cent.

Nigeria’s inflation rate rose to 15.7 per cent in February 2022, largely attributed to the uptick in core inflation from 13.87 per centrecorded in January 2022 to 14.01 per cent in the review month. The rise of the core inflation was due to the surge in energy prices, which was exacerbated by the electricity blackout across the country.

Briefing journalists immediately after the 141th MPC meeting in Abuja, the CBN Governor, Godwin Emefiele, suggested that inflation is expected to be on the rise, on the back of continuous rise in energy prices and could only be contained if the Russia-Ukraine war can be addressed as soon as possible.

Emefiele said: The Committee noted the impact that the global price increase in and other products is having practically on all economies.

“The MPC also noted that this has resulted in imported inflation on the Nigerian economy and believes that specific actions need to be taken to ensure that this trend does not continue given the adverse consequences and aggressive rising price level could have on the cost of living and purchasing power of Nigerians.

“Although MPC is relieved that food inflation declined marginally due to good harvest, with some scarcity expected as we approach the planting season, the Committee is optimistic that with the high level of strategic grain reserves of the CBN, it is relieved that food prices would remain relatively moderated.

“While growth has continued to improve, members noted that inflation was confronted with upward pressure due to emerging risks within the domestic and external environment.

“The Committee decided to adopt a hold stance as it would indicate a precautionary and consistent policy stance with the prevailing economic conditions particularly as further economic and financial shocks are exerted from the ongoing Russia-Ukraine war”.

On the lingering fuel scarcity, Emefiele, blamed the high energy prices been experienced in the country on the Russia-Ukraine was and disclosed that the management of the CBN would soon meet with the Nigerian National Petroleum Company Limited (NNPC) and the Ministry of Finance Budget and National Planning to work out necessary steps to address the petroleum product supply problems.

“The MPC is worried about global shortage of petroleum products. This has led to inflation. MPC is seeking ways to address this. “Nigeria exports crude oil and imports refined and this means we have to pay for imports. The committee noted the reduction in foreign reserves. The committee is also worried about oil theft and its effects on the economy. But we’re hopeful that the coming into operations of Dangote Refinery will help in ensuring fuel availability. The coming into operations of the entire Dangote complex will save Nigeria 30 per cent of the cost of importing the items produced in the complex.

“We were told that the Finance Ministry and NNPC are holding a meeting on the scarcity challenge. We too will be engaging the NNPC as well to see ways of making it easy for them to end fuel shortage which has led to arbitrary pricing.

“The rising price of diesel has led to poor electricity. We are working to put things under control,” Emefiele said.