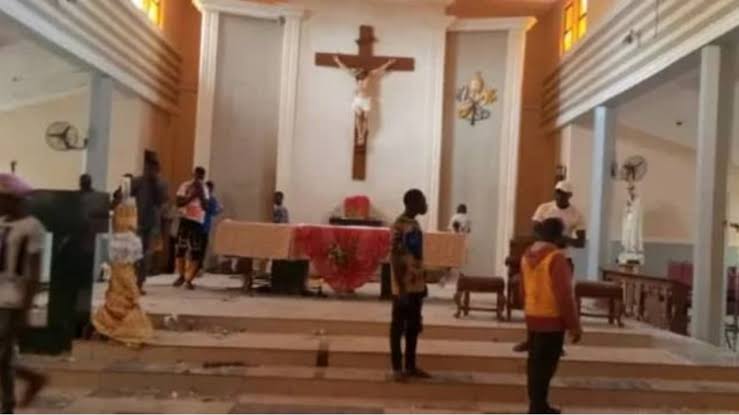 The Federal Government on Thursday disclosed that last Sunday attack on St. Francis Catholic Church, Owo, Ondo State, by gunmen leading to the death of worshippers have been linked to men of Islamic State of West African Province (ISWAP).

The Nigeria Minister of Interior, Rauf Aregbesola who briefed State House Correspondents at the end of National Security Council Meeting presided over by President Muhammadu Buhari at the Aso Rock Presidential Villa Abuja said security agencies have been detected to go after them .

The minister who briefed alongside Inspector-General of Police, Alkali Baba; said the police has been ordered to go after the perpetrators of the act and bring them to justice.

According to him, the imprint of ISWAP has been found on the scene of the attack, vowing that no stone will be left in turn is far as investigations are concerned .

In his words, ” ISWAP’s aim is to pit Nigerians against each other by this attack to make it appear as ethno-religious war. these people are just heatless and their nefarious agenda does not reflect in any way that they are supporting one religion.

On his part the Inspector General of Police, IGP Alkali Baba said that as part of efforts to sure-up the nations security architecture, 10,000 police officer graduating July 2022 will be immediately deployed to help in the security of lives and properties of Nigerians.

Giving updates on the kidnappers of Methodist Prelate, The IGP said investigations ate still on as no arrest has been made.

The IGP also stated that 17,374 Police men will be deployed to Osun State for the forthcoming Osun Gubernatorial Elections.

The IGP also hinted that 10,000 additional police officers will graduate next month to be added to the security architecture immediately.