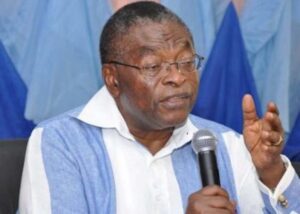 Former owners of Nigeria’s major carrier, Arik Air, have taken issue with Asset Management Corporation of Nigeria (AMCON) over the circumstances that led to the takeover of the airline on February 9, 2017.
The Vice-Chairman of the former management of the airline, Senator Anietie Okon, told the news team in an exclusive interview that the airline was in full operation with 69 scheduled flights on the day it was taken over.
He was reacting to the claim by AMCON that the airline’s services were disrupted due to paucity of operational funds when it was put under receivership.

Okon said as at the takeover period, Arik Air had about 3,200 Nigerian staff, adding that the airline under AMCON now has fewer than 600 personnel as labour crisis brews occasionally due to the inability of the new managers to pay workers regularly.

“Arik was in full operation at the time AMCON forcefully took over the airline. In fact, on the day AMCON invaded the Arik head office in Lagos with two lorry-loads of mobile policemen; there were 15 serviceable aircraft and four aircraft on minor maintenance.

“On that day, the Lagos-London flight departed; the airline operated about 69 flights due to the harmattan haze, which disrupted flight operations. Normally the company operated well over 100 flights daily. AMCON continued operating the airline’s typical schedule for roughly two weeks before shutting down long-haul services,” Okon added.

He stated that the company, like others in Nigeria then, had difficulties in accessing foreign exchange from the Central Bank of Nigeria (CBN) to meet its operational needs for spare parts and other foreign obligations.

He said the then management of the airline approached the CBN to plead for assistance to access forex without success.

“It should also be noted that by the time AMCON took over Arik Air, there were 15 serviceable and four under minor maintenance aircraft, but from what we know, only four are now in service as of today. You know I am the vice-chairman of the airline; it is unfortunate that some of us put money into these things to help the country at that level in terms of aviation, but what we have got in return is that we have been on the receiving end of one intrigue after another. We have been restrained on the issue hoping that AMCON and government will see logic and act in fairness,” Okon said.

Okon said it was surprising that AMCON had to wet-lease aircraft from Mongolia because of its inability or unwillingness to maintain the fleet it inherited from the former management of the airline, adding that Arik was effectively servicing its loans by the time it was taken over by AMCON.
He said: “Where are the spare parts valued at over $120 million that was in Arik maintenance stores when AMCON took over the airline?

“It is most untrue that creditors were closing in on the airline when AMCON took it over. The airline had exited (paid up) the facility of approximately $650 million it took from the US Exim Bank between 2007 and 2009 and paid up approximately $200 million from Export Development of Canada (EDC) for the first set of aircraft (3XCRJ 900 and 2XQ400) it provided facilities for. EDC second set of aircraft, two new Q400 and CRJ 1000 were being paid for as we agreed on terms and conditions when AMCON took over.
“Payment terms and conditions were being met as required by the financier. Furthermore, Arik was meeting her obligation with Afriexim Bank for two Boeing B737- 800.”

Okon also explained why the airline became indebted to the local banks.
“It should be noted that these international financial institutions requested that the credit facilities extended to Arik should be guaranteed by Nigerian banks. Consequently, Arik made arrangements with various Nigerian banks to collect ticket sales and retain an agreed percentage for the service of these facilities. After deductions by the various banks, the net balance of the ticket sales collection was therefore made available for Arik operations and maintenance.

“This has been the modus operandi from inception in 2006 up until February 2011 when Union Bank informed Arik that due to a change of policy by the Central Bank of Nigeria, it would now require to reclassify guarantees, which were off-balance sheet assets to on-balance sheet facilities, meaning that guarantees were now being defined as full-fledged loans by the policy of the CBN. “Consequently, the guarantee provided by UBN for the purchase of two A340-500 aircraft from Airbus Industries had now gone above the single obligor limit by virtue of the new policy of CBN,” Okon said.

According to him, by this change of policy by CBN, UBN was directed to transfer the guarantee as the local facility to AMCON even though the credit line was performing adequately.
“All attempts to get AMCON to discuss these issues and keep to the original agreement were resisted. The implication by consequence was that a foreign loan that was being serviced at a two per cent interest rate was now converted from US dollar to naira with a 24 per cent interest rate. You can now understand the predicament the airline was placed into and our journey into AMCON was not due to default but due to the CBN policy change between 2010 and 2011.

“The impact of this policy change as applied across the board without considering the international implications and putting all companies into the Nigerian lending envelope was not only wrong but devastating. It is unfortunate that those that led the banking regulatory sector at that time refused to comprehend the consequences for international borrowers and its effect on Nigerian companies. In fact, there was a sense of stubbornness, and this did not change with subsequent regulators. This is the major reason that the Foreign Direct Investment Index (FDI) has dramatically fallen and has affected the GDP and employment status of Nigeria,” he added.

Okon said Arik was not being closed on by any banks and alleged that AMCON was deliberately orchestrating a situation with the banks for some time even though the banks were resisting.
“Of course, being a company directly under the banking regulator, the banks gave in when AMCON suggested a buyout and took over the so-called loans. I hope this answers the question as to how we ended up in AMCON. I have never seen an organisation desperate to buy performing loans with government money,” he said.

Reacting to the allegation by AMCON that former management of Arik acquired Airbus A340-500, which had become obsolete by the time it arrived in Nigeria, Okon said: “What does he (Arik’s receiver-manager) mean by obsolete? Is he an aviation expert? “This man is an accountant in the back rooms of AMCON, who has no knowledge of aviation. These aircraft were manufactured in 2009 and delivered directly to Arik. They were used on the long-haul routes and provided great service and comfort to our customers. These types of aircraft are being used extensively by other carriers in Nigeria. So when he said that these aircraft are obsolete I don’t know what he is talking about or where he is getting his information from,” he added.

Okon said AMCON’s claim of giving Arik $150 million was incorrect and a deliberate attempt to malign the airline.

He stated: “AMCON also said it injected over N375 billion that is equivalent to approximately $1 billion. Now, one is short of words to describe the incredulity of this claim by AMCON. This should be a cause of concern for the public, the government and most of all, the CBN. What exactly were the funds used for? How many aircraft did they buy with that kind of money? How many of the existing aircraft did they repair or maintain? Why are most of the aircraft grounded and unserviceable? Who was paid this large sum of money by AMCON? Please let’s not forget that we are talking about money collected from the government. Where did these funds come from? Where are the spare parts and tools valued over $120 million?”

He said AMCON on February 8, 2017, alleged in court that Arik owed approximately N136 billion in total and the agency moved in on February 9, “under the pretext that they needed to protect the creditors and the operation because of the airline’s strategic importance.”

“Today, four years later, these guys from AMCON are telling the country, that under their capable and caring hands, they have been able to destroy the airline operationally, destroyed its routes, and its certification, landing rights in the UK, USA, SA (South Africa), and UAE, and brazenly, added a further N240 billion on the so-called original debt. How can that be acceptable? “The truth is that they malign the owners and quietly give the impression that they are helping the nation. This is a scam! Will Nigerians accept this? I believe if anybody would accept this, I am very sure Mr. President will not accept this under his watch,” he added.

Okon said when AMCON forcibly moved into Arik Air, the company had 3,350 staff, out of which 3,280 were Nigerians and the rest were expatriates.

“All of these staff members were highly trained, many by Arik, or trained by Arik abroad. Our FOCC (Flight Operation Control Centre) was fully licensed by the FAA (US Federal Aviation Administration). Our maintenance was done by EASA (European Union Aviation Safety Agency) and JAA (Joint Aviation Authorities) of Europe, and also by the NCAA (Nigerian Civil Aviation Authority). We assisted Nigeria in getting the initial Category I certification, for flights to the USA.

“However, AMCON which came out to save jobs and the airline today have fewer than 600 staff. Most are unpaid for months, are not doing any tangible training and are not repairing any of the aircraft even though there is high demand,” Okon said.

Okon said the self-serving statements by AMCON were meant to defend its incapacity to manage the airline.

“AMCON is taking some aircraft from Arik to start Nigerian Eagle. These aircraft belong to Arik and are supposed to be used to generate revenue for Arik to reduce its alleged debts. The aircraft has been working for AMCON for the past four years and the loan has not been defrayed but rather has grown exponentially. AMCON keeps on bandying figures. It is clear that setting up another airline is only a wasteful adventure that will neither resolve the Arik issue nor make the new airline viable. “That is all we can say about the outrageous and irresponsible statements of AMCON in respect of the situation with Arik.

“Mention one unit of industrial investment or private investment prior to AMCON’s takeover in which they have managed successfully to return the company or stated industry to prove AMCON’s ability to manage businesses,” he added.