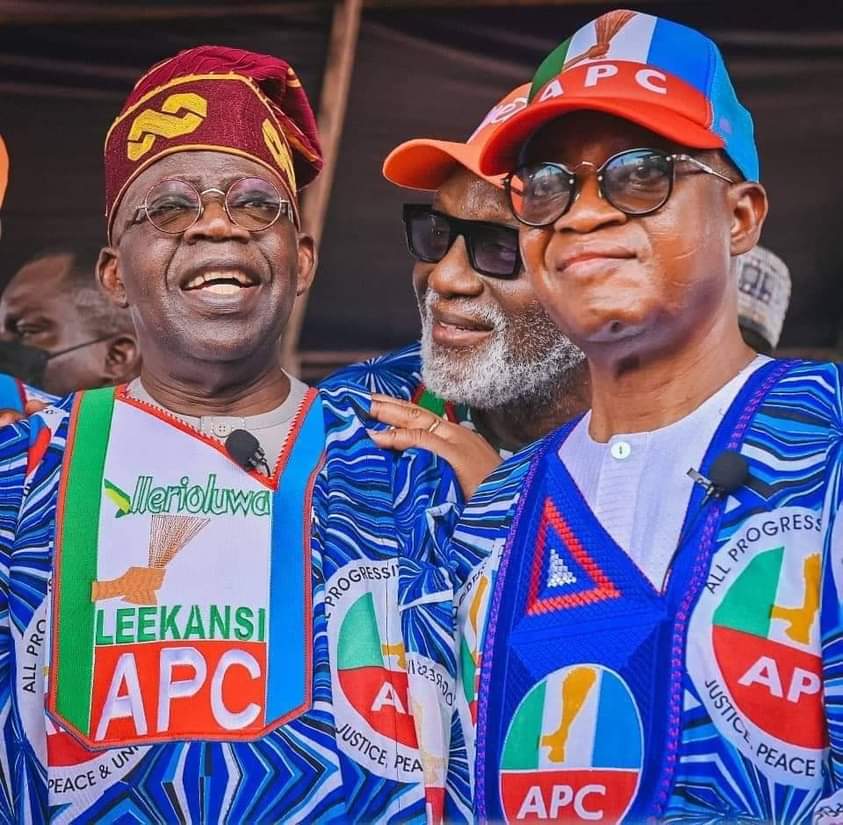 ● as Asiwaju, others rally support for Oyetola’s re-election

Ahead of Saturday’s Osun governorship election, twenty-one governors of the ruling All Progressives Congress, APC, have described the incumbent governor of the State and candidate of the party, Adegboyega Oyetola, as an excellent performer who has brought purpose to governance.

They said those who have a fair mind devoid of prejudices and biases will testify to the developmental strides Oyetola has registered since becoming governor of the State in 2018.

The progressive governors, therefore, reaffirmed their unalloyed support for Governor Oyetola just as they declared their readiness to do all necessary within the law to ensure his re-election.

While addressing a mammoth crowd at the Mega rally held at the Osogbo Township Stadium on Tuesday, national leaders of the APC expressed confidence that the party will coast home to victory in overwhelming fashion come Saturday.

The Senate President, Senator Ahmad Lawan, lauded Oyetola’s prudence and efficiency in managing the state’s meagre resources, calling on citizens to look beyond political sentiments in their choice of who to elect, and to vote massively for Oyetola.

Lawan said: “I’m bringing solidarity from the National Assembly. We are believers of this party and its candidate because Osun has witnessed serious and massive transformation in the last three and a half years.

“We have a governor who is prudent and efficient in the face of very meagre resources. Today, Osun has witnessed so much infrastructural development, political stability and peace. We believe that we have everything we need for development with this our Governor”.

On his part, the presidential flag-bearer of the APC, Asiwaju Bola Ahmed Tinubu, urged the people of Osun to replicate the victory recorded last month in Ekiti.

According to Tinubu: “We have come to ask that you vote massively on Saturday for APC, not as a mark of entitlement but because of the future of your children.

“Before you make your decision, think of the future. We are a party that guarantees your future because we are known for fulfilling our promises. Let us entrust the affairs of our state into the hands of those who mean business, not mushroom parties”.

In his remarks, the National Chairman of the Party, Senator Abdullahi Adamu, said the mega rally was an indication that the APC was not taking any chances with the affairs of Osun, saying the State deserves a leader like Oyetola in its quest for development.

Adamu said: “This is a mega rally to promote our candidate. We are taking no chances with the affairs of Osun because the state deserves a leader like Oyetola in its quest for development. This is why we have come in full strength to support him in a bid to ensure his re-election. Those who have a fair mind will testify that he has done so much since he became governor in 2018.

“We are here not only to testify to what he has done but to appeal to you to turn out in large numbers to vote massively for him. We are anticipating a better outcome than what we had in Ekiti and by the grace of God, we are sure of victory. I want you to be the APC ambassadors, telling those who are not here what you have seen. Continue to spread the good works of this government in the nooks and crannies of the state.”

Speaking on behalf of his colleagues, Chairman of the Nigeria Progressives Governors’ Forum, Atiku Bagudu of Kebbi State, assured that Oyetola has the backing of all APC governors in the coming election, saying he had earned it with his outstanding performance.

Bagudu also lauded the tremendous and landmark developments Osun had recorded across sectors since Oyetola’s emergence.

“We are pleased to be here today, we are proud to hear about the numerous progress that this administration in Osun has recorded. We are confident that the love and admiration of the people of Osun are with you because of your great achievements.

Earlier, the Chairman of the National Campaign Council for Osun governorship election and Lagos State Governor, Babajide SanwoOlu, described Oyetola as deserving of another term based on his personal encounters with the people of the State.

In his words; “We thank the originator of IleriOluwa political slogan, our dear Governor Oyetola, the one because of whom we are here. Indeed, it is a huge honour that we stand here today because this is a worthy assignment and we have a sellable candidate. It is a job that is gratifying and doable because Governor Oyetola has indeed performed excellently well.

“I have been on campaign trail with him and I have witnessed the overwhelming support and how the people have said he is deserving of another term.

“People of Osun, do not be deceived by those who are trying to say otherwise. Let us vote massively for Oyetola to continue doing his great works for every sector of the population. This is a man that that is an embodiment of good governance.”

While welcoming members of the National Campaign Council to the State, the Director-General of Oyetola’s re-election Campaign Council, Senator Ajibola Basiru, described the grand rally as a celebration of excellence.

He said: “Today, you are being welcomed to the celebration of excellence in governance because in the last three and a half years, Governor Oyetola has brought dexterity, commitment and integrity to the affairs of this state across sectors.

“Now, we are on the path to consolidating the progress and development of the state by re-electing that man that is certain to deliver development over and over. With him, Osun is on the path of sustainable development”.

In his short remarks, Governor Oyetola, said Osun is on the path of consolidating on the gains of the last three and a half years.

He urged the people of Osun, especially workers, to shun political traducers who are peddling falsehood that his administration will renege in its commitment to their welfare if re-elected, saying he remains strongly committed to their welfare.

Oyetola also declared his readiness to do beyond what he has done in his first term, saying the welfare of workers and citizens and the overall development of Osun remains his priority.