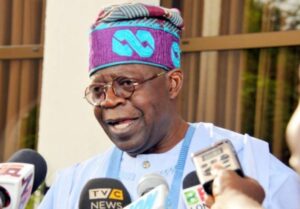 National Leader of the All Progressives Congress (APC), Senator Bola Tinubu, has described the First Lady, Mrs. Aisha Buhari, as a woman of deep convictions and feelings for what she believes in, saying she is the voice of conscience in the presidency.

This is just as Vice President Yemi Osinbajo (SAN) also described the president’s wife as an unusual first lady.

Both spoke at the presentation of Aisha’s biography during which over N150 million was realised.

Also speaking at the public presentation of the book, “Aisha Buhari: Being Different,” authored by the Senior Special Assistant to the President on Administration and Women Affairs, Dr. Hajo Sani, Ekiti State Governor, Dr. Kayode Fayemi, described her as the voice of the voiceless.

Tinubu, who was the chairman of the event, described her as a human being of deep convictions and feelings that is more than passionate about her husband and her family.

According to him, “You can plainly see she loves them deeply. This depth of feeling extends to a love of country. From the very onset, she was totally committed to ensuring the success of the campaign of then-candidate Buhari and later to the success of the administration of President Buhari.”
The former Lagos State governor said she had a naturally strong connection with the average person because she speaks with sincerity and belief.

“We noticed this very early during the historic 2015 campaign. Thus, we convinced her to play a vocal and visible role in that groundbreaking campaign. Her efforts contributed to her husband’s success. She helped him make history during that campaign. Since coming to the office of the First Lady, she has not stopped making history,” Tinubu said.

The APC national leader said she had also been an active and dedicated voice to those whom society sometimes forgets, adding that she gives comfort to the broken and seeks relief for the destitute.
According to Tinubu, no one can doubt her concern, adding that her care for the wellbeing of women, children and the powerless has established the standard for the office of the First Lady for years to come.
Tinubu said Aisha had shown that a First Lady should not stand aloof and detached from what is happening in the country.

“Mrs. Buhari never shies from what she believes in. This makes her a reliable and true advisor to her beloved husband. No doubt that Mr. President’s administration has been enriched because of her active role and the teamwork that exists between husband and wife.”
Tinubu also stressed that Aisha’s voice of conscience in the presidency had considerably helped in the functioning of the Buhari-led administration.

He noted the First Lady’s sterling contribution during the 2015 presidential campaign that culminated in the then-candidate Buhari’s eventual victory and the current functioning of the presidency.
He stated that the president’s wife had continued to play uplifting, unifying roles both in symbol and substance, adding that she has been “a voice of conscience calling us to be our better selves for the good of the nation and for the betterment of the weakest, most vulnerable among us.

“As such she has been a strong pillar of support not only to the president but also to the Nigerian people whom they both serve with such patriotic commitment and high purpose,” he said, adding: “First Lady Aisha Buhari has done a masterful job melding the calls of tradition and the imperatives of today into a creative, benevolent role that has enriched society and the art of governance.”

The APC leader also commended the author of the book, not just for documenting the background, education, career, family and public life of Aisha in an enjoyable, easily readable manner, but also in narrating the political and constitutional context within which the president’s wife has moulded the position of the First Lady in Nigeria.
Also speaking, Osinbajo said Aisha had redefined the office of the First Lady.

He noted that she had taken steps outside the box of what used to be the traditional roles in Nigeria’s presidential history, adding that her unusual approaches had endeared her to the citizens.
According to him, Aisha has regaled the Nigerian public with many firsts, including opening up her office through social media outlets and connecting with the public in real-time.

On the book, the vice president declared: “Dr. Hajo Sani has written a most engaging book on an incredibly fascinating person, Her Excellency, Aisha Buhari, Nigeria’s First Lady. It’s unlikely that any First Lady in Nigeria’s history has, in such a few short years, captured the imagination of Nigerians as profoundly as Aisha Buhari.

“She’s, of course, the first First Lady to be on Twitter, on Instagram, and other social media platforms, getting her unfiltered views across to the Nigerian people and she’s probably the first to receive, in real-time, the opinions of Nigerians on her views.

“With her views, forthright, crisp, truthful and once in a while controversial, she has established an ongoing conversation with the Nigerian people. The issues that concern them most, the issues that concern us the most; good governance, security, putting food on the table, the education of our children, prompt payment of pensions to army veterans, drug abuse, the violation and victimisation of women and every once in a while she airs her own personal struggles, her annoyance, in a manner, probably unprecedented in the role of the First Lady anywhere.”
The vice president stated further: “There is no question that Aisha Buhari is different. Her difference has been empowering for the Nigerian people and there is never any question that her comments come from a good place, a place of genuine love and respect for the Nigerian people and our several concerns.”

To capture the First Lady, Osinbajo also quoted her husband, Buhari, who said: “Aisha, as the world has come to know her, is kind-hearted. This made her transition to philanthropy and humanitarianism easily. When she became First Lady, her protective mien was exerted when women, children and other vulnerable people are abused.
“I’ve observed with kin interest as she addresses many of the social concerns that have given her sleepless nights. She has, therefore, been a worthy partner and a beacon for some of the good things that Nigerians have come to identify with our government.’ And I concur. I agree.”

On the book’s expose on the First Lady’s girl child advocacy and her stand that no girl should be given out in marriage before accomplishing primary and secondary schools education, Osinbajo noted: “We understand the roots of her relentless pursuit in these past years of the empowerment of women, especially through education, the need for young girls to get primary and secondary education before getting married.

“We understand her stand that no girl should get married before the age of 17. It is from her own experience of being married at 19 and her single-mindedness and determination in ensuring that our educational pursuits were not aborted by her obligations as a wife and mother.

“We also get a glimpse of the role she considers primary, to borrow the expression, Mum-in-Chief to Halima, to Yusuf, to Zarah, to Hanan and Chuchu, and now many grandchildren. Her personal attention in the lives of her children, each and every one of them, and her fierce protection of their privacy and individuality, is a lesson in bringing up children under the scrutiny of a sometimes mischievous press.

“Perhaps because of the undefined nature of their positions, it was Michelle Obama who said famously that there is no handbook on how to be the First Lady and sometimes the uncertain impact of their rules on the affairs of state.

Fayemi, who spoke on behalf of the governors, said the frankness of Aisha endears her to many Nigerians.
He said though the First Lady’s “candour may appear in a manner of indiscretion,” the governors are proud to be associated with her as the defender of the defenceless.

“Yes, that candour may appear in a manner of indiscretion. Some might even argue that when you are in this gilded cage otherwise known as the presidency, you are not supposed to be seen to say some things but I think it is in that candour that we have the authenticity of our First Lady and that is what endears her to the majority of Nigerians, that is also what being different is about.”

Over N150 million was realised at the public presentation of the biography with the business magnate, Alhaji Aliko Dangote buying a copy of the book with N30,000 as the cover price for N30 million.
Tinubu also bought a copy for N20 million, Chief Kessington Adebutu, who was represented bought a copy for N25 million and businesswoman, Mrs. Bola Shagaya bought copies for N10 million, among others.

Those who graced the occasion include Secretary to the Government of the Federation (SGF), Boss Mustapha, who was represented by the Head of the Civil Service of the Federation (HCSF), who delivered his welcome remarks; Deputy President of the Senator, Senator Ovie Omo-Agege; Director-General of the World Trade Organisation (WTO), Dr. Ngozi Okonjo-Iweala (recorded message); and Deputy Secretary-General of the United Nations (UN), Dr. Amina Muhammed (recorded message).