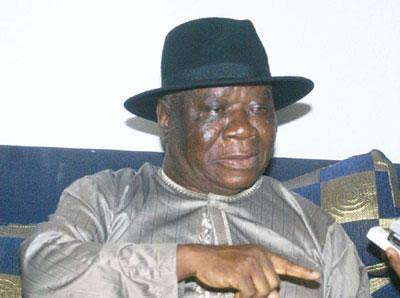 As the 2023 general elections gathers momentum, Leader of the Pan Niger Delta Forum (PANDEF), Edwin Clark, has explained that former President, Goodluck Jonathan, no longer associates with the Peoples Democratic Party (PDP) because of the betrayal and ill-treatment he received by members when he sought re-election in 2015.

Pa Eldwin Clark, who made this disclosure on Tuesday while hosting members of Delta Central APC Leaders of Thought on a solidarity visit in his Abuja residence, added that Jonathan had learnt his lesson and would not want to repeat past mistakes.

The elder statesman stated that PDP leaders from the north including the governors and the then national chairman worked against Jonathan because of their claimed that it was the region’s turn to produce the president.

Clark explained that many PDP governors from the north raised funds for Major General Muhammadu Buhari Rtd.who was the All Progressives Congress (APC) candidate at the time, against their own presidential candidate.

He lamented that the same Northern Governors in the PDP who had opposed zoning were now discussing competence and integrity in 2022.

The former Federal Commissioner of Information accused the party of manipulating the election of Atiku Abubakar as its presidential candidate in 2023.

In his words, “Now coming home politically, Jonathan was the president for some time as the result of the death of President Yar’Adua. Jonathan ruled for about five years, he is a Christian and the northerners said it was their turn.
“From 2011, they have been worrying Jonathan. Even in 2015, the northern PDP leaders ganged up with APC, Tinubu and removed Jonathan from office. They did not campaign, Jonathan was on his own.
“So, when people say why Jonathan is not in PDP, now attending PDP meetings, I can safely say that he’s learning his lesson that the people he trusted did not trust him. They squandered the party’s money and left.
“So, when people say why is Jonathan not in PDP, he knows how they betrayed him, how the northern PDP governors contributed money towards Buhari’s success, how members of government betrayed him.
“The national Chairman of PDP at the time was Governor (Adamu) Mu’azu. He did not go to his hometown to campaign, he was only following Jonathan about, he knew what he was doing. Everyone of them wanted Buhari to win. So, Buhari won. He has ruled for eight years.
“Now, the same northerners are now saying competence, no zoning, integrity.
“It fell for the prey, they maneuvered PDP with Alhaji Abubakar who has been wanting to be president of Nigeria over the years, championing the cause of division. So, the PDP, a party we love, PDP a party of southern Nigeria disappointed us.

“In 2019, 11 million people voted for Atiku Abubakar, PDP. Five million from the north, five million from the south. Now he doesn’t think that we ever did anything for him.
“So, Nigeria has change. If anyone tells you that all is well in Nigeria that person living in a fool’s paradise.
“I’m happy to note that you are members of the ruling party that is APC and I will give you a message to Mr. President, who is the leader of your party. But we are in the minority but in every society the minority and the majority must live together. We have never seen a community where you have only the majority if that’s the case amongst them some will become minority.

“We are the largest ethnic nationality in Delta State but within you some people are dominating. Because we are alive, we don’t need this society where people are not equal. That’s what Mandela fought for that everybody is equal. People should live in a country where you grow up to do anything God created you do.”
The elder statesman recalled that when governors of Southern states insisted on zoning the presidency to the South, the Southern and Middle Belt Leaders Forum (SMBLF), of which he is the leader, bought into it, regretting that despite an agreement for Southerners not to accept the running mate position to any Northern presidential candidate, Delta State Governor Ifeanyi Okowa, ignored that despite hosting one of the governors meetings in Asaba.
Clark noted that the APC, with which he believed the southerners should have no dealings with, had evolved into the party that listened to the region’s zoning aspirations.
He said he would have voted for the ruling party but for his age and its decision to fly a Muslim-Muslim presidential ticket.
Clark said: “Several times we met here and before the PDP had their primary, we met here again and repeated the same thing.
“We didn’t know that our own Governor, who initiated this meeting, if you agreed for a meeting to be held in your house and you backed out thereafter, you have betrayed your colleagues. Isn’t it?
“So, that’s why, one of my cousins called Okowa miscreant.
“So I’m therefore very happy that you are here to give us not me alone our organization your support and they will hear it.
“We have seen that up till today we still believe in the southern presidency. So that is why some of us had said that APC that we never wanted to talk about is the one that has listened to us by zoning presidency to the south.
“Of course, I’m an old man now, I will be 95, I no longer belong to political party. Perhaps if I were to vote, and you put only two parties, that is APC and PDP, I will vote for APC for zoning the presidency to the south, listening to our opinion.
“Who is Atiku? Who thinks that he is very, very important that people like us when we speak, he will not listen. A good leader must be one that will listen to us. So, if he becomes president what will he do?”
Clark also accused Atiku of opposing Jonathan since 2010.
“Now, Atiku has been kicking against the presidency of Jonathan since 2010. He said it was their turn but today, the same Atiku and his people now said integrity. Where in Nigeria…all of you here have integrity, competence.
“You know this time, the governors of the states they think they are so powerful.
“But the only thing that your party has done that has made me to withdraw my support is this Muslim-Muslim ticket. I won’t talk about it, because I have written a statement.”