A teenager has been convicted of killing 17-year-old college student Duran Kajiama as he walked to a pizza shop in Dagenham.

The 17-year-old male was found guilty on Wednesday, 28 June, of manslaughter on the grounds of diminished responsibility.

The conviction followed a trial which began on 15 May at the Old Bailey. He will be sentenced on 19 July.

On the evening of 12 November 2016, Duran Kajiama was walking with a 16-year-old friend to Pizza Go Go, which is situated in Church Elm Lane, Dagenham. 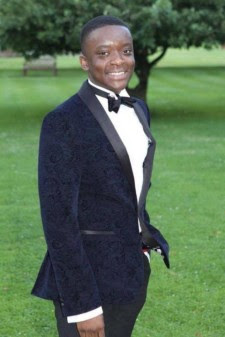 Duran and his friend were attacked by a group of males, including ‘A’, at around 18:20hrs as they walked up Church Street. The dispute flared up for no apparent reason outside a convenience store.

Duran suffered a single, fatal stab wound to the abdomen, and was pronounced dead at the Royal London Hospital the following morning.

His friend sustained three stab wounds which caused serious but not life-threatening injuries. He was discharged from hospital four days after the attack.

Detectives from the Homicide and Major Crime Command investigated the killing.

Witness accounts, analysis of CCTV and evidence from a forensic examination of the scene led to the identification of ‘A’.

‘A’ was arrested on the morning of 16 November at Heathrow Airport as he boarded a Turkish Airlines flight. He was intending to travel to Lagos on a Nigerian passport. He was charged on 17 November 2016 and convicted as above.

“This was a brutal and senseless attack on two young men as they were simply walking to get a pizza.

“There was absolutely no need for a verbal dispute to escalate to any sort of violence. Yet the use of a knife tragically and needlessly transformed what may have been an altercation and a scuffle into a horrific act of violence leading to the death of one teenager and serious injuries to his friend.

“My thoughts are with Duran’s family and with the friend who was seriously injured on the night of the attack. I hope this conviction provides some measure of comfort for them.”

Two other males (A and B, both 16 years) were charged with murder. They were found not guilty of all offences.