Nigerian man dies in Manchester and no next of kin

By : BEN News Team
Comment: Off
BREAKING REQUEST:
If anyone knows the family of this man below, please get in touch urgently.  Please help identify his family either in the United Kingdom  or Nigeria.
Store ‘family’ raise funds for funeral of Asda worker Eddie 30 Jan 2014 13:18
Eddie Adegun, 81, faced a pauper’s funeral until staff at the store stepped in to raise enough money to give him the send-off he deserved. 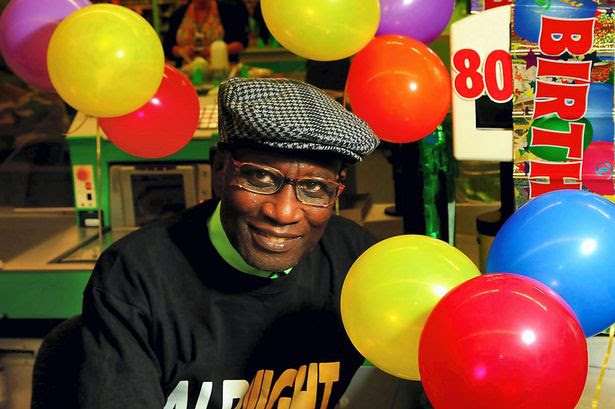 Eddie Adegun pictured at the Asda store when he turned 80
A supermarket worker who died leaving no known relatives is to be laid to rest by the colleagues who considered him family.
Eddie Adegun, 81, worked at Asda in Hyde for more than eight years until just days before Christmas when he lost his battle with throat cancer.
Unable to trace a next of kin, the pensioner faced a pauper’s funeral until staff at the store stepped in to raise enough money to give him the send-off he deserved.
Eddie, a former engineer who was originally from Nigeria, started work at Asda after becoming bored with being retired.
He worked nights on the checkout where he was known to customers for his catchphrase ‘Alright!’
Friend and colleague Rosh Kumar said: “Eddie had this big warm smile, he always used to crack a joke and engage customers in conversation and that endeared him to everyone.
“I have never seen him lose his temper and be anything but nice to people. He just exuded happiness and positivity.
“He was a very much loved man. The best way I can put it is that we were his family. The fact that he had such enthusiasm when he came into work was because he considered us to be his family too.
“He had no means of a funeral so we wanted to do something befitting Eddie. The store has made a contribution along with a lot of his colleagues and customers and so far we have raised just over £1,000.”
Eddie, who lived in Fallowfield , died in Christie’s where medics have agreed to look after his body until pals have raised enough to pay for a proper funeral.
They hope to boost funds at Hyde’s Live Lounge tonight with an evening of music and entertainment for Asda staff. Colleagues will take part in a football match to raise cash at Woodley Sports Centre on Sunday. The event, which is open to the public, kicks off at 5pm.
Donations can also be left with Mitchell  or Claire Petch at the Greenfield Street store.
Address: Greenfield St, Hyde SK14 1BD
Phone:0161 882 5700