Rome, 15  June 2018 – Postal services can play a pivotal role in delivering remittances, lowering the transfer costs and providing access to basic financial services in Africa, according to a report  released today by the International Fund for Agricultural Development (IFAD) and the European Commission (EC) on the occasion of the International Day of Family Remittances to be observed tomorrow. 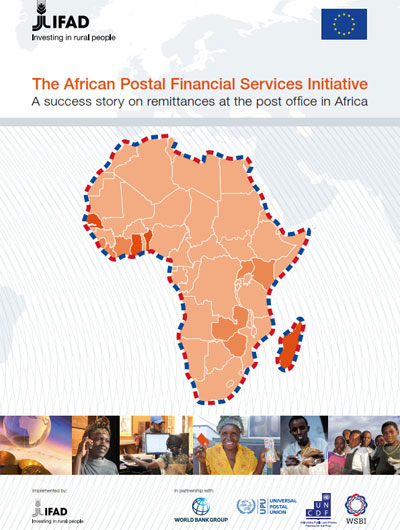 The report, A success story on remittances at the post office in Africa, analyses the results achieved by African Postal Financial Services Initiative (APFSI), a joint programme led by IFAD and financed by the European Union (EU). The programme has been implemented in 11 African countries in cooperation with the World Bank, the United Nations Capital Development Fund, the Universal Postal Union and the World Savings and Retail Banking Institute.

“The remittance market is changing at a rapid pace,” said Pedro De Vasconcelos, Coordinator of the Financing Facility for Remittances at IFAD. “Technology is transforming the payment systems and digitalized financial services are creating new opportunities. In this context, postal operators play a prominent role in delivering remittances to rural migrant families, providing them with financial services they rarely had access to.”

According to De Vasconcelos, the strong presence of post offices in remote and rural areas is extremely valuable. Their historic footprint helps build trust in the provision of rural financial services.

In 2017 alone, African migrant workers sent over US$70 billion to their families back home, representing an increase of more than 10 per cent from 2016 and more than 36 per cent over the past decade.

Sub-Saharan Africa remains the most expensive region in the world to send money home. In 2017 the average cost was 9.3 per cent of the amount sent.

As a result of the AFPSI joint programme, which has been implemented over the last five years, the cost of receiving remittances via post offices in four pilot countries, Benin, Ghana, Madagascar and Senegal,  decreased by 42 per cent and post offices delivered remittance services at an average cost of less than 5 per cent. This means an additional $35 million were available to migrant families between 2014 and 2016.

“The EU is committed to work with partners to lower the cost of remittances and promote faster, cheaper and safer transfers. Our collective objective is to reduce to less than 3 per cent the transaction costs and eliminate remittance corridors with transfer costs higher than 5 per cent, as stated in the 2030 Agenda and the European Consensus for Development,” said Stefano Signore, Head of Unit in charge of Migration and Employment in the Directorate General for International Cooperation and Development at the EC.

Financial inclusion remains a challenge in Africa. According to recent estimates, only 41 per cent of the population above 15 years of age has an account and access to formal financial services. In this context, postal operators have an important role to play, especially in rural areas. As a result of the joint programme, at least 100,000 adults opened new postal accounts accessing financial services for the first time.

“Having a savings account and access to credit is fundamental for families to invest in income-generating activities and build their future,” said Mauro Martini, an IFAD expert on remittances and migrants’ investments and co-author of the report. “Remittances can be an engine for development.”

Estimates show that while 75 per cent of remittances are generally spent on basic needs such as food, housing, health and education, another 25 per cent can be invested in asset-building or activities that generate income and jobs and transform economies, in particular in rural areas.

The EC began collaborating with IFAD in 2004, with the intention of increasing the development impact of remittances while enabling poor households in rural areas to access financial services. Since 2005, the EC has mobilized euro 9.5 million for IFAD’s Financing Facility for Remittances, including the APFSI. A new euro 15 million programme focusing on Africa will be launched soon to reduce costs further and improve financial inclusion and impact for development.