Nestlé announces the winners of the Sub-Saharan Africa innovation challenge

ABIDJAN, Ivory Coast, September 4, 2019/ — Start-ups SHOPIT, EXPORTUNITY and WAKULIMA from South Africa,Benin and Tanzania respectively, emerged today the winners of the Nestlé Research and Development (R&D) Sub-Saharan innovation challenge. Selected from among a highly competitive group of 174 submissions received from 27 different countries across Africa, these start-ups projects were judged by a panel of Nestlé (www.Nestle.com) executives as the most promising.

In addition, the initiative MAFANI led by 2 students from University Gaston Berger of Saint Louis (Senegal) was selected as the winner of university category of the challenge and will receive CHF 10,000 in prize money. 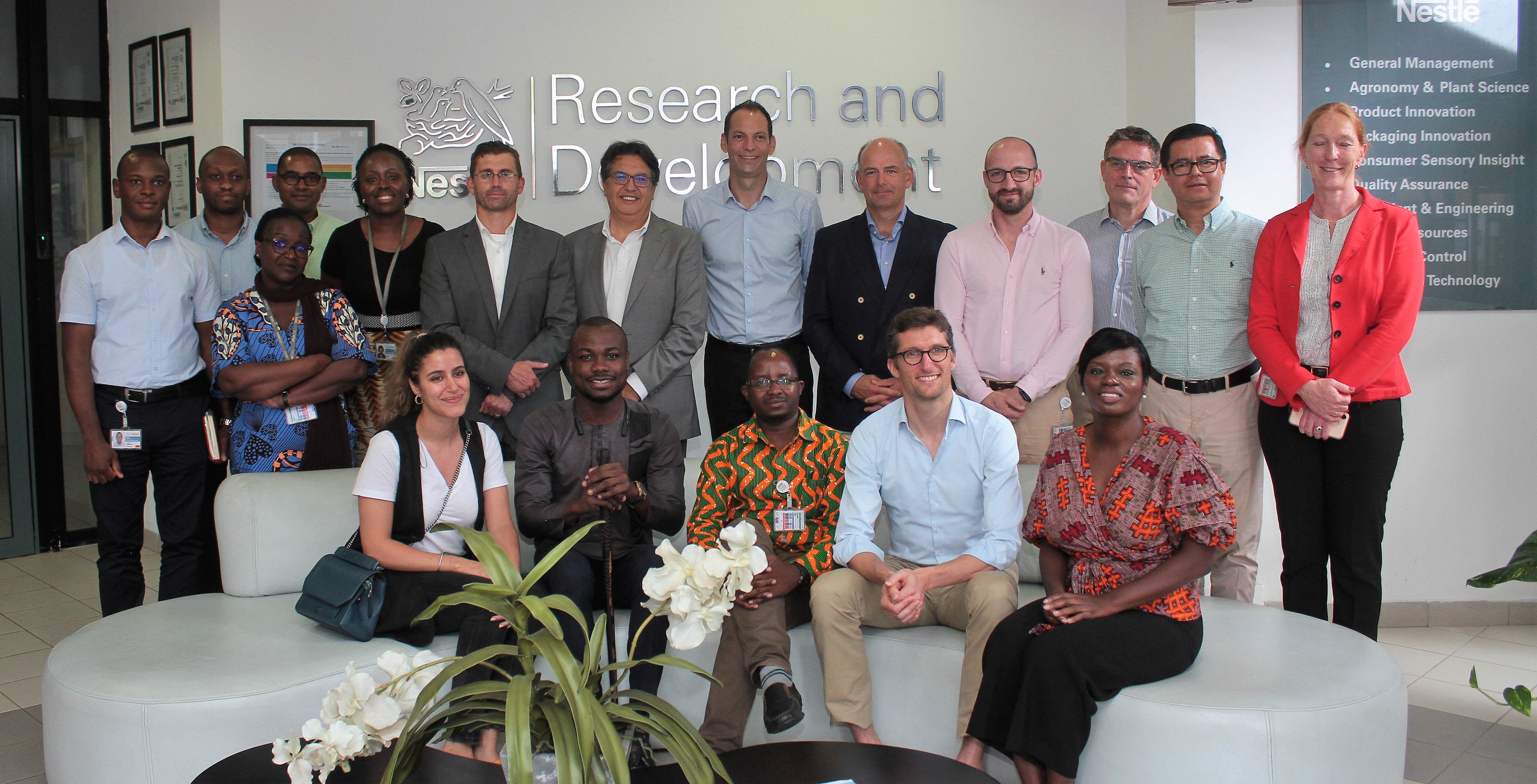 The 3 start-ups winners have been awarded a 4-month residency in the new Nestlé R&D Accelerator for Sub-Saharan Africa, located at the Nestlé R&D Center in Abidjan, Côte d’Ivoire.

During their stay, the 3 selected start-ups will have the opportunity to tap into Nestlé’ R&D’s expertise, as well as have access to state-of-the-art infrastructure such as hot desks, labs, kitchens and pilot testing equipment to further advance and potentially commercialize their ideas.

According to Joëlle Abega-Oyouomi, Head of the Nestlé R&D Center in Abidjan, “the Sub-Saharan African innovation ecosystem is filled with creative energy and strong entrepreneurial minds. However, there is not enough infrastructure to test and validate new ideas therefore limiting access to a wider market’’. She highlighted that “Nestlé’s R&D science and technology expertise will contribute by providing a platform to deliver innovations adapted to African consumers’ needs and preferences.” 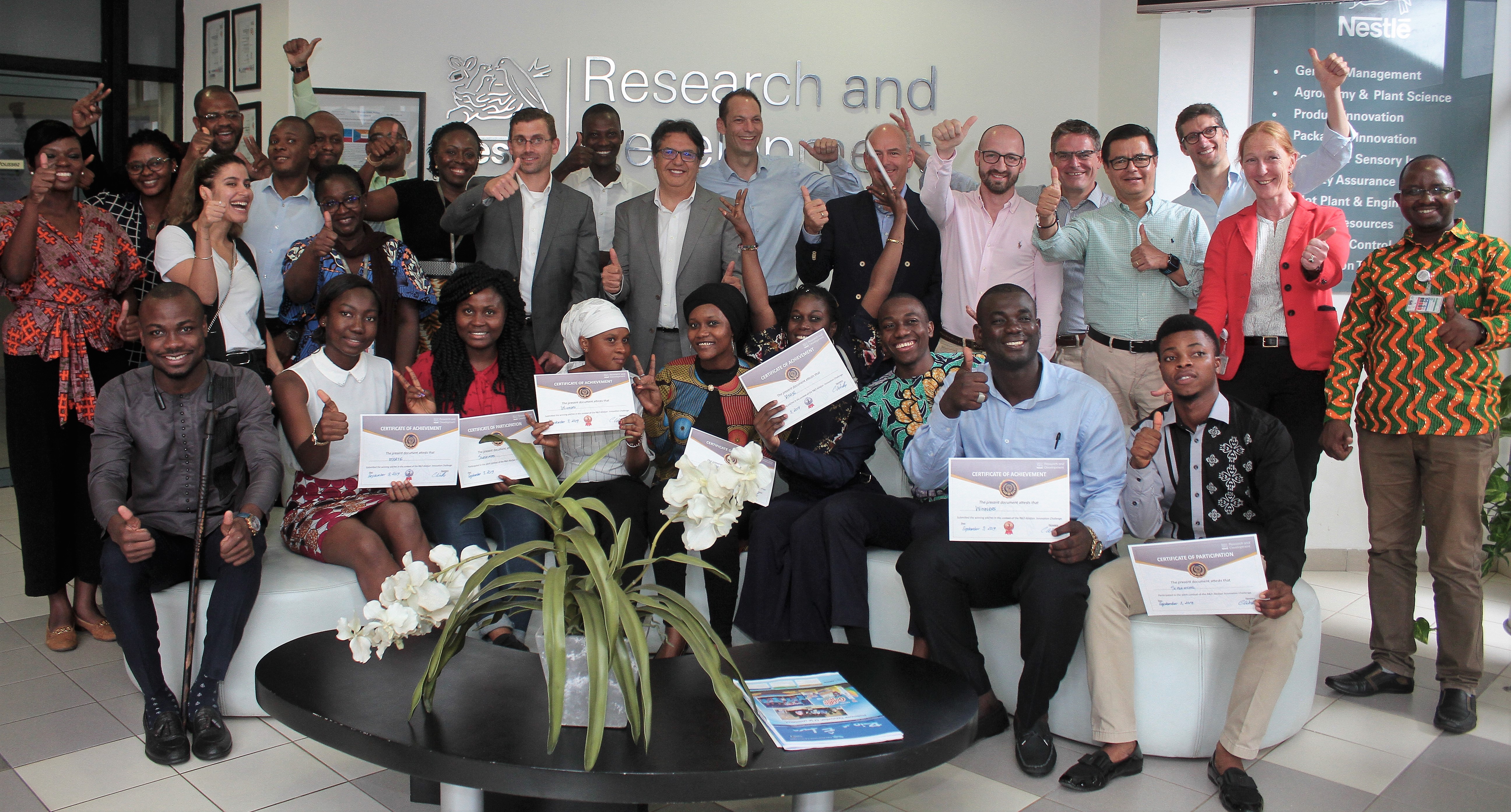 In May 2019, Nestlé launched the R&D innovation challenge in Sub-Saharan Africa as part of its efforts to stimulate innovative solutions across four areas: affordable nutrition, environmentally friendly packing solutions, sustainable cocoa plantlets, and new routes to markets. It has set a particular focus on universities and start-ups in Côte d’Ivoire, Ghana, Kenya, Nigeria, Senegal and South Africa.

Chair of the challenge selection panel, Mr. Rémy Ejel, Market Head for Nestlé in Central and West Africa, was pleased with the high level of participation from the region. “I am impressed by the original ideas pitched to us today.  With a majority of the submissions coming from Ghana and Nigeria and Côte d’Ivoire, the region is in an exceptional position to become an innovation hub for the African continent.”

Bruno Olierhoek, Market Head for Nestlé East and Southern African Region expressed his delight at the dedication showed by students and start-ups to this initiative. “We are thrilled that this innovation challenge resulted in such great interest from the East and Southern African Region. In the spirit of co-creation we can now look forward to joint ideation between the winners and Nestlé for solutions that will contribute to a healthier future of the people of Africa’’.

DOHA, QATAR, September 4, 2019/ — Two education projects serving Rwanda, Sierra Leone, Nigeria and Liberia have been recognized as WISE Awards winners for their work in education. The World Innovation Summit for Education (WISE) (www.WISE-Qatar.org), a Qatar Foundation (QF) initiative, has revealed the winners of the 2019 WISE Awards. Each year, the WISE Awards recognize and promote six innovative projects from across the world that address global educational challenges.

The Akilah Institute (www.AkilahInstitute.org), a women’s college in Rwanda, founded in Washington, D.C., is an award-winning institute that prepares students to solve the world’s most pressing challenges through a curriculum based on 21st century skills, personalized learning, ethical leadership and sustainability. Akilah’s unique model leverages technology, competency-based education, and personalized learning to offer a transformative learning experience that puts graduates on the fast track to success.

Elizabeth Dearborn Hughes, Akilah’s CEO and Co-founder, commented: “We are incredibly honored to receive this award, and grateful to WISE and the Qatar Foundation for recognizing and supporting the pioneering work Akilah is doing to transform higher education for women in East Africa.”

Family Business for Education (Street Child) (www.Street-Child.co.uk), based in the UK, supports low-income families in Sierra Leone, Nigeria and Liberia with support packages to help fund children’s’ education, including financial aid, business training, planning support, mentoring and access to incentivised savings schemes and loans. Since 2009, the project has supported over 15,000 families.

Tom Dannatt, Founder and CEO of Street Child stated: “We are delighted that Street Child’s Family Business for Education model has been recognised by WISE for its transformative impact on some of the world’s poorest children and families in Sierra Leone. With the support of WISE, I am excited by this opportunity to further replicate the programme in other countries where we work, helping even more children access education.”

The projects will be celebrated during the WISE Global Summit from November 19- 21, 2019 in Doha, Qatar. The theme of the global Summit is “UnLearn, ReLearn: What it means to be Human” (www.WISE-Qatar.org/Apply/). In addition to publicity and networking opportunities, each will receive $20,000 (US).

Nigeria High Commissioner, to South Africa, Ambassador Kabiru Bala, has been recalled for consultation over the xenophobic attacks of her citizens in that country.

A Presidency Source who pleaded anonymity because he is not authorised to speak on the matter disclosed that Nigeria has also pulled out of World Economic Forum on Africa in Capetown, South Africa, on September 4-6 over the xenophobic attacks.

Vice President, Yemi Osinbajo was to represent Nigeria at the forum.

Earlier, the Democratic Republic of the Congo, Rwanda and Malawi pulled out of the event.
Presidents Paul Kagame (Rwanda),  Felix Tshisekedi (DRC) and Peter Mutharika (Malawi) have all withdrawn from the event.
The source added that Nigeria has also demanded for full compensation for the victims of the attacks.

According to the source, this was the outcome of President Muhammadu Buhari, Osinbajo and Foreign Affairs Minister, Geoffrey Onyeama’s meeting on the raging xenophobic attacks in South Africa.

Onyeama had on Tuesday during at a joint news briefing with the South African High Commissioner to Nigeria, Mr. Bobby Moroe, insisted: “In the first place, we must address the issue of compensation. There has to be accountability and there has to be responsibility for compensating all those Nigerians that have suffered loss and we are going to absolutely push forward.”

Already, some protesters Wednesday morning stormed a Shoprite mall in Abuja to protest the attack on Nigerians in South Africa.

The fight against money laundering has taken a significant step forward today, as HM Revenue and Customs (HMRC) announces a record fine against a London business for breaching strict regulations which could have left them at the mercy of criminals looking to wash dirty cash.

West London money transmitter Touma Foreign Exchange Ltd ignored anti-money laundering regulations and received a £7.8 million penalty. Details of the fine were published on GOV.UK today (4 September 2019), as HMRC continues to use its powers to crack down on those that break the rules.

The company was fined by HMRC for a wide-range of serious failures under the Money Laundering Regulations. Between June 2017 and September 2018, the business breached rules on:

Mr Hassanien Touma was banned on 20 May 2019 from any management roles at a business governed by anti-money laundering regulations after he acted as an officer for the MSB. Individuals are required to pass a vetting test to ensure they are fit and proper to carry out the role and Mr Touma failed to do this.

The fine was announced following a separate HMRC, Metropolitan Police (MPS) and Financial Conduct Authority (FCA) month-long crackdown on MSBs at risk of being used for money laundering to fund organised crime, such as drug trafficking, violent crime and terrorism.

During the July crackdown, MPS and HMRC officers executed warrants at 12 addresses in West London and seized evidence of money laundering. On 3 July 2019, Metropolitan Police officers arrested two men in central London and seized £100,000 cash intended for an MSB.

On 12 July 2019, after an investigation by HMRC assisted by the MPS, Shunjian Jiang, a London man, was given a suspended jail sentence for trading as an MSB, without being registered for anti-money laundering supervision.  The judge ruled that Jiang’s home in Colindale, London, was bought using the proceeds of crime because he was illegally trading as an MSB without being registered with HMRC and would be subject to confiscation proceedings.

As part of the commitment to educate businesses, HMRC and MPS officers visited 40 MSBs in the Queensway area of London and reminded them of their obligations under the Money Laundering Regulations. Specially designed leaflets were hand-delivered to all 9,000 MSBs across London during July and August to highlight the money laundering risks and need to properly manage these.

HMRC officers also visited five money service businesses assessed to be at a higher risk of being used for money laundering and are taking civil action against four of them for failing to take adequate measures to protect themselves from criminal abuse.

“Money laundering is the lifeblood of the illicit drugs trade, human trafficking and other serious crimes which bring harm and misery to communities across our country. It also supports economic crime which costs the UK billions of pounds every year.

“We know that criminals use MSBs to disguise and move dirty money, and we’re determined to thwart them by helping businesses avoid being exploited in this way.

“However, a word to the wise for those firms who, either by ignorance or design, continue to flaunt the rules – this record fine shows we mean business, so get your house in order before we come knocking.”

Anyone with information about such crimes should report it to HMRC online, or call our Fraud Hotline on 0800 788 887.