GOV. ABIODUN TASKS WOMEN TO SURPASS LEGACIES OF PAST ICONS

Nigeria women have been tasked to brace up to the sustainable development challenges of the 21st century and contribute their quota towards surpassing the legacies of past women icons in the country.

Ogun State Governor, Prince Dapo Abiodun, who gave this charge in his address at the year 2019 National Women Conference, convened by the Osun Women Development Association (OSUNWA) in Osogbo, State of Osun, emphasised the positive and credible contributions of great women leaders, who had impacted to the global socio-economic development.

Governor Abiodun, represented by the Secretary to the State Government, Mr. Olatokunbo Talabi, commended the visionary leadership of the Wife of Osun State Governor, Mrs. Kafayat Oyetola and OSUNWA members for organising the conference at this period, pointing out that Nigeria women in all spheres of human endeavours had exemplified themselves, not only in governance matters but also in global socio-economic development.

Speaking on the theme, “WOMAN: Pioneer of Change for Inclusive Participation in Development”, Governor Abiodun said the theme was apt and very instructive, particularly when the issue of women representation and active participation was attracting lot of attention globally, maintaining that women are vital to the economic growth and development of any nation.

“History abounds with the exploits of women of Ogun State, who involved in the campaign for women’s right in politics and decision making; names like Efunroye Tinubu, Chief (Mrs.) Olufunmilayo Ransome Kuti and Iyalode Bisoye Tejuoso, amongst many others, readily comes to mind.

“This is without mentioning the quality of leadership women folks have continued to perform in some of our Ministries, Departments and Agencies. I must say, the brilliant track records of achievement of many of our women, as Deputy Governors, just as we have a very vibrant Deputy Governor, in the person of Her Excellency, Engineer (Mrs.) Noimot Salako-Oyedele and other female appointees that have continued to aid the socio-economic development of our dear State”, he submitted.

He thereafter called on participants to explore the opportunities of the conference, saying Ogun State would look into the recommendations from the conference towards the successful implementation of “Building Our Future Together” agenda, while his administration would continue to accord women equitable representation.

Also speaking, Wife of the Vice President, Mrs. Dolapo Osinbajo, re-echoed and analysed the innate potentials of women, who had been regarded as co-pilots and whose roles cannot be over-emphasised, appealing to women to come together towards charting a course for the all-round development of the nation.

Dignitaries present at the event were; the Host Governor, Mr.Gboyega Oyetola, Wives of Ogun, Lagos ,Ekiti and Ondo Governors amongst others.

NYERI, Kenya, October 10, 2019/ — Campaign targeting over 10,000 women aged 40 years to 74 years- the recommended age for screening; Screening will be done through mammography- the only screening method that has been shown to be effective in reducing breast cancer mortality; Mammography screening services available for free for women registered for the UHC pilot

The Nyeri County Government, Ministry of Health’s National Cancer Control Program (NCCP) and GE Healthcare (https://www.GEHealthcare.com/) have launched a Mammography screening campaign across Nyeri County to promote early detection of breast cancer. The one-month campaign will target over 10,000 women aged 40 years and above which is the recommended age for mammography screening. Over 50 Community Healthcare Volunteers and 30 healthcare professionals were trained to support the campaign.

The Nyeri County Deputy Governor Dr. Caroline Karugu said, “Breast cancer is a cancer that affects the breasts, mostly in women and it can also affect men though it is rare.  In 2018, breast cancer was the most common cancer treated at the Nyeri County Referral Hospital. Out of the 10 cases of cancer reported at Nyeri County referral hospital, 7 cases are breast cancer cases. Even with this occurrence, only two mammogram exams were done per day around the same period indicating underutilization of the digital mammography machine available at the hospital. This campaign seeks to challenge women to do their Mammo screening which saves lives.” 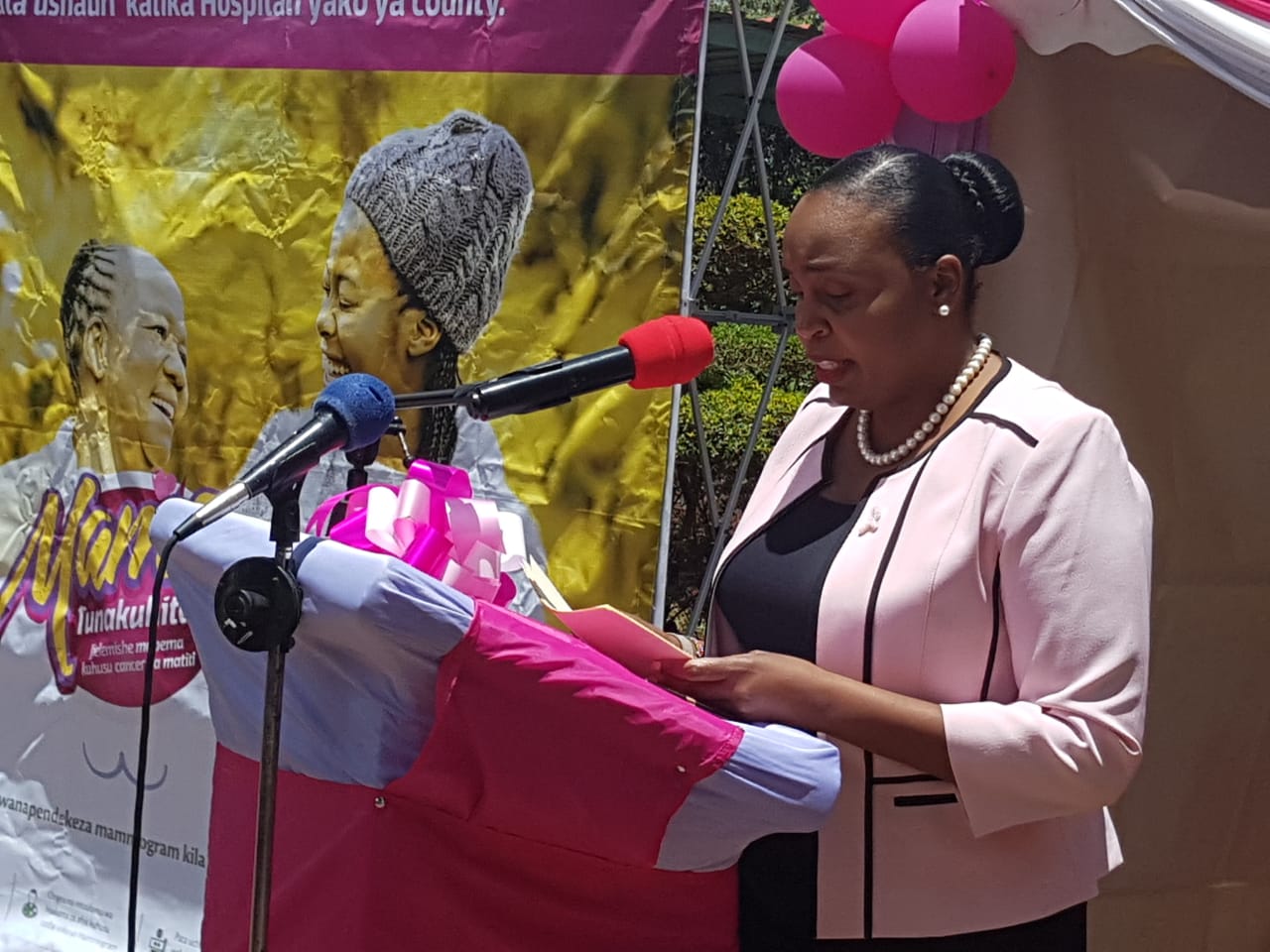 Dr. Karugu will be the ambassador for the campaign promoting mammography screening in the fight against breast cancer. Leading by example, Dr. Karugu got her first mammogram exam at the Nyeri County Referral Hospital during the launch of the campaign, together with other attending the event as a way of motivating more women to participate in the screening.

As a trusted partner to healthcare providers globally, we are excited to partner with NCCP and Nyeri County to provide the women of Nyeri County access to world-class mammography solutions that have positive impact on early breast cancer detection. GE Healthcare is committed to developing solutions for women that encourage adherence to screening guidelines and improve outcomes for breast cancer screening.” said Brenda Mbathi, CEO GE East Africa. 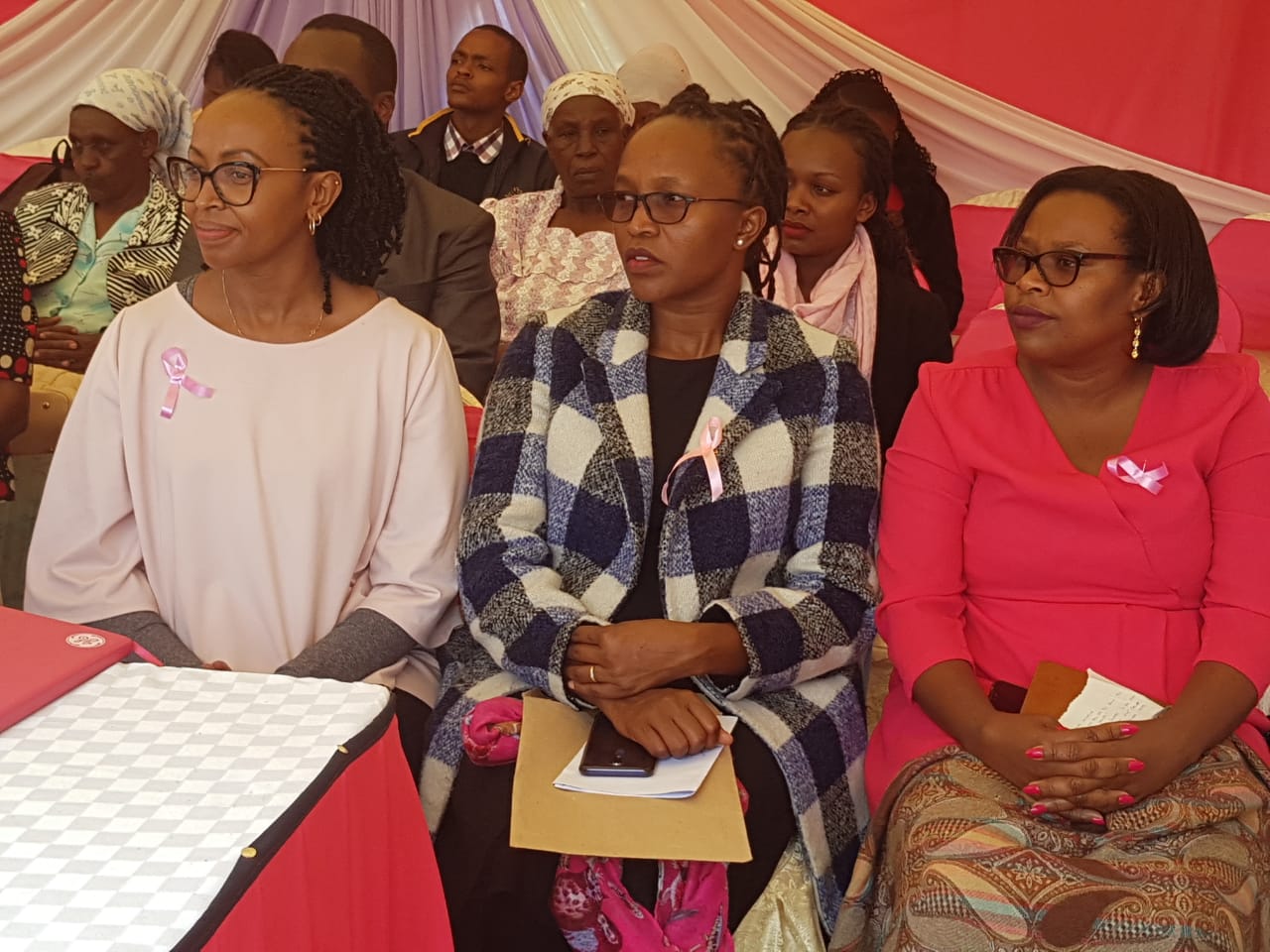 Achieving Universal Health Coverage (UHC) by 2022 is one of the government’s Big Four priority agenda aimed at ensuring that no Kenyan undergoes financial hardship while seeking health care. The government has ensured access to digital mammography services across the 47 public hospitals across the country for women in places that need it the most. Decentralization of these services and the UHC pilots have seen a dramatic direct and indirect cost saving to patients seeking breast cancer screening services.

According to GLOBOCAN 2018, breast cancer is the leading cancer in incidence in Kenya with almost 6,000 new cases, accounting for over 2,500 deaths and making it the 3rd leading cause of all cancer deaths in the country.  Additionally, seven women die every day in Kenya as a result of breast cancer.  The campaign is geared towards cultivating a culture for screening amongst women. Mammography is the only screening method that has been shown to be effective in reducing breast cancer mortality.

Senator Michael Opeyemi Bamidele representing Ekiti Central and the Chairman of the Senate Committee on Judiciary, Human Rights and Legal Matters,  has made a case for more statutory funding to the Judicial Arm of Government and other related institutions in the country.

Sen. Bamidele made the call on the floor of the senate during debate on the general principle of  2020  Appropriation Bill

He said the need to increase the budgetary allocation to the judiciary from the proposed N110 Billion in the Appropriation Bill will further strengthen the independence of the judiciary .

Ekiti Senator adding that the Federal Government should also review the salaries of judges and other judicial staff upward as an instructive measure to stem the tide of corruption in the judiciary.

He also canvassed for the upward review of the budgetary allocation to the National Human Rights Commission.

The Senator commended the Federal Executive Council as well as the Legislature for the level of alacrity with which the 2020 Budget was made ready for presentation to the National Assembly early October, 2019 adding that such development is  indeed a positive signal that it is no longer business as usual.

However, Bamidele went further to stress on the imperative of ensuring the nation restores the budget cycle back to the usual January-December financial year cycle.