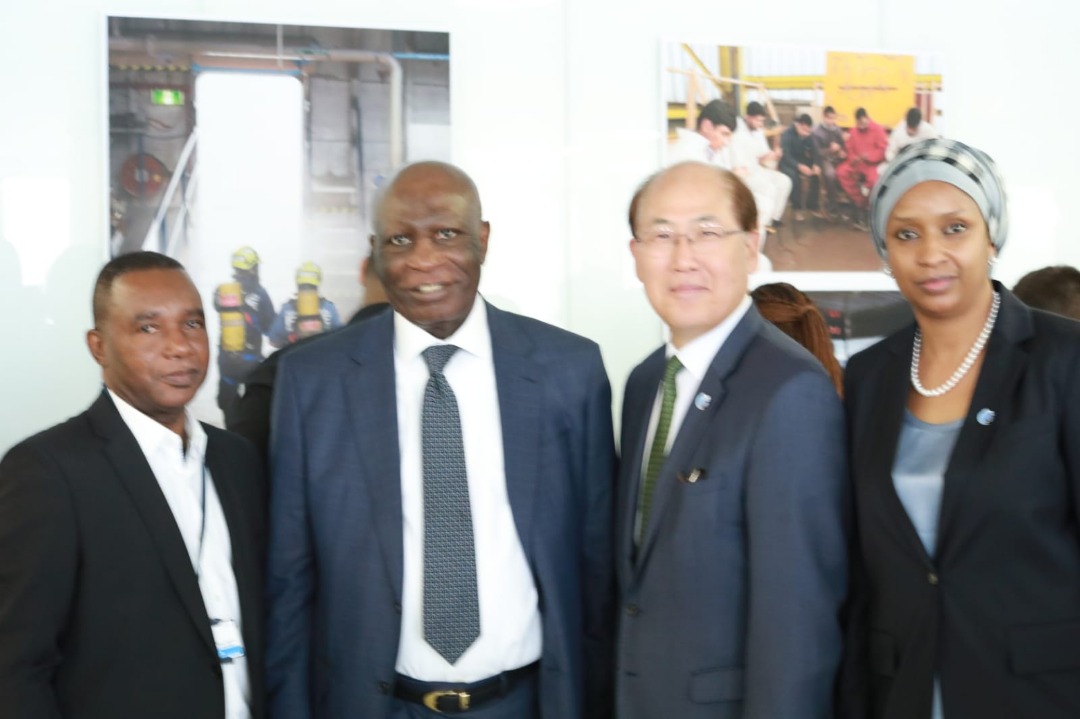 Nigerian Port Authority Managing Director was few days ago elected as the Vice Chairperson of the facilitation committee (FAL) of the International Maritime Organisation (IMO) in London.

Ms Hadiza Bala Usman who was personally in attendance amongst global maritime industry experts and executives was elated about the new status afforded Nigeria and her self.

According to a statement, Ms. Bala Usman was formally elected and inaugurated at the end of the week-long 43rd session of the FAL Committee in London on Friday.

The statement signed by Jatto Adams, general manager, corporate and strategic communication, NPA, said Bala Usman was elected after receiving unanimous votes and will serve for a one-year period starting from 2019 up till 2020.

In her remarks, the NPA MD, who is also the Vice President, African Region, of the International Association of Harbour and Ports (IAPH), thanked members of the organisation for their confidence in her.

She promised to work conscientiously with other members of the committee to sustain the ideals of the IMO.

The IMO committee which is currently chaired by Marina Angsell from Sweden, works together with the 173-member states of the organisation to ensure the observance of all the conventions and protocols that ensure the safety and security in the shipping business as well as the global environment.

Other industry leaders and captains of Industry gathered to wish the newly elected board executive successes in her tenure. Among them are Ambassador Mary M. Emiene, Comoros Island Represetative, Alistair Soyode and Dr. John.

IMO – the International Maritime Organization – is the United Nations specialized agency with responsibility for the safety and security of shipping and the prevention of marine and atmospheric pollution by ships. IMO’s work supports the UN SDGs.

Euroknowledge announces its annual Euro Knowledge Leadership Awards for outstanding individual and corporate achievements. The Awards will be conferred during the Euro Knowledge Leadership Award Ceremony on the 29th of April, 2019 at the House of Lords, London. It will be attended by captains of industries, political leaders, policy makers, business magnates and institutional investors.

The Awards are geared towards acknowledging and celebrating exemplary leaders that have made signiﬁcant contributions and positive impacts in their speciﬁc fields as role models, tech giants, innovators, community and inspirational leaders.

Euroknowledge is an international strategic communications and consultancy company and a trusted advisor to many of the world’s leading businesses, governments and financial institutions. To deliver on its mandate, EuroKnowledge has carved a niche for itself on a number of high-profile events across the globe, supporting high end advisory services to world leaders, governments and captains of industries. We provide assistance to the owners of Oil and Gas assets in order to appraise field development options. This service integrates the subsurface, engineering and commercial disciplines in order to provide clear recommendations for clients.

Nominations are for the following categories:

The Ceremony will begin with a tour of the House of Lords, then a Forum on Trade, Investment and governance, to be followed by a networking reception that will usher the participants to dinner with entertainment during the presentation of the awards

Personalities that will attend this event include

AITEO FOUNDER, BENEDICT PETERS, John Momoh, founder of the Channels TV and H. E. Mr. Zulfiquar Ghadiyali, the CEO at The Royal office of Sheikh Tahnoon bin Saeed bin Tahnoon Al Nahyan to be honoured at the Euro Knowledge Leadership award event at the house of Lords in London on the 29th of April.

The Aiteo Group’s 20 yearevolutionthrough Africa’s Oil and Gas sector has been exemplary as well as revolutionary–going from a downstream start-up to becoming a leading integrated energy conglomerate with strategic investmentsinhydrocarbon (or commodities) exploration and production.

Mr Peters ventured into the oil and gas sector as an entrepreneur in 1999 and initially traded mainly in the downstream sector. In 2015, his company, Aiteo won the bid for the largest onshore oil block in sub-Saharan Africa.

Beyond oil, Mr Peter’s grouphas investments in mining, agriculture, infrastructure development, electricity generation and distribution, with a fast-developing retail distribution network. It is focused on serving the needs of communities across the continent, byleveraging a unique combination of a strategic asset base, technology, innovation, and someof the best technical and business minds across the industries itserves.The group has been expanding rapidly, extending its transformationaloperations to different countries across Africa and Europe.

Peters is passionate about youth empowerment and has donated generously to support football on the African continent. Through Aiteo, he sponsors the Nigerian Football Federation, Aiteo CAF Awards, Aiteo Cup (The Federation’s foremost Cup in Nigeria) and a team in his company’s host community. He has also assisted thousands of internally displaced persons in northern Nigeria while also supporting clean water sanitation initiatives in Africa in partnership with Face Africa, improving the lives of over 25,000 people in rural Liberia and more. Peters has a keen interest in social and environmental issues in the agricultural sector. He chairs the Joseph Agro Foundation, which seeks to tackle high levels of unemployment and water shortage by creating job opportunities for farmers in Africa.

In recognition of his ground-breaking contribution to development, Peters was one of four recipients of the Marquee Award for Global Business Excellence at the Africa-US Leadership Awards in 2014. In the same year, he won the “Leadership CEO of the Year” award. In 2015, Peters received the Dr. Martin Luther King Jr. Legacy Award in the “Economic Empowerment” category. He waslisted as one of the ‘50 Most Influential Nigerians in 2017’ by BusinessDay. Furthermore, he won ‘Oil and Gas Man of the Year’ at the prestigious Guardian Awardsin 2018 as well as the prestigious Forbes Magazine Oil & Gas Leader of the year. In January 2019, The Vanguard Media Limited honoured him with the Businessman of the year award at a gala in Lagos.

H.E. Ghadiyali is a fifth-generation construction & Steel manufacturing entrepreneur, which lead to his impeccable business acumen and as a CEO, he’s involved in major business’s and strategic management of investment projects across Asia,MENA, region in field of Real Estate, hospitality, General Trading, mining, Fin tech, AI and AR based tech projects.

H.E. Mr. Ghadiyali has also been involved in various Social entrepreneurship projects across Asia, India and Africa. He’s associated with famous artists and best friend “Akon” for “lighting up Africa project” and has worked for the refugee and humanitarian cause worldwide under the UN affiliates, United Refugees and green Council.

H.E. Ghadiyali represents industry and society at large and has been a pioneer in supporting companies from across the world to establish presence in Middle East and North Africa with substantial support from the highest levels through the office of the royal sheikh. Such companies include UHAUL logistics, Fire fly Aerospace and Cinemoi Technologies in the USA while ING Robotics, which develops ISTAR level UAV’s for both civilian and defense applications.

Mr. Ghadiyali is a partner at the WDH corporation, and several large US defense corporations on several defense projects worldwide. The Cambridge University has signed exclusively for the MENA region while, & He’s also on board of the Encanto Potash Corporation, based out of Canada- TSX traded company- 1.2 Billion USD valuation company (based on report by Amec foster wheeler). Mr. Ghadiyali Is on board of several start-ups across the globe and has been a mentor to such companies to achieve financial & market access in UAE and across the world”.

Few initiatives of the Private Office (Tech, AI, Aerospace, Education, Financial, O&G, and more):- CineMoiWorld will be the only online virtual, Avatar-based entertainment world with Live Streaming of its kind designed to attract Millennials. The application of this technology to its audience is multifold, ranging from Luxury fashion, online shopping, gaming, television, live concerts, comedy shows, major fashion shows, as the height of couture is unveiled during fashion weeks in Paris, Milan, London and New York. With further applications in Automobiles, real estate, Hospitality & more.

The event include a tour of the House of Lords, a forum on the role of Extractive industry on National Development, to be followed by a networking reception that will usher the participants to the sumptuous dinner with entertainment during the presentation of the award. There will be one on one pre-arranged meetings with investors. Our media partners include mainstream media, the BBC, FT UK, FIN magazine, BEN TV and others.

A profile of the nominee stating achievement should be sent to admin@euroknowledge.org