Following the Grenfell Tower tragedy, dhf (Door & Hardware Federation) is stressing the vital importance of compartmentation and the terrible risks of getting it wrong.  In a bid to prevent the spread of fires in multi-occupancy buildings such as tower blocks and office buildings, the Tamworth-based trade association is calling for a change in Building Regulations, and for the UK government to enforce the use of complete doorsets in fire compartmentation.

Fire compartmentation is the term used for the sub-division of a building into manageable areas of risk, to prevent the spread of fire and smoke, and provide adequate means of escape.  This involves the use of fire doors on individual flat entrance doors as well as those used in escape corridors and stairways.  Fire doors are one of the most important and effective elements of a building’s passive fire protection, with more than three million being installed in the UK each year. Correctly manufactured, installed and maintained, they can save lives by protecting the route of evacuation and provide emergency services with safe access to the building.

dhf’s CEO, Bob Perry, explains:
“There are many crucial components of fire doors that distinguish them from conventional doors, ranging from specialised smoke seals around the frame to fire-resistant glazing, but if just one of these components fails due to poor maintenance or damage, the effectiveness of the door can be severely reduced.  Problems also arise in ensuring the various components of a fire-resisting door assembly are compatible with each other and that they are correctly assembled.  The benefit of using complete doorsets is that they are manufactured and supplied as a complete unit with the frame, the leaf and all the associated hardware having been tested and certified together.  This eliminates the risk of non-compatibility between the various components.”

dhf’s recommendations come in the wake of a number of recent tragedies involving fire, particularly the Grenfell disaster which resulted in the loss of 71 lives.  Failure to adhere to proper safety regulations can not only result in loss of life, but in legal implications.  Earlier this year, Southwark Council was fined £570,000 following a fire at a 14-storey block of flats in South London in 2009 where six people died, including three children.  Following the tragedy, inspectors visiting the premises discovered several structural and safety flaws, including breaches of fire-resistant structures between each maisonette staircase and the common internal doors, a lack of compartmentation in the false ceiling structures of common corridors, and a failure to provide fitted intumescent strips (which swell when heated) and smoke seals on fire doors.

“Fire doors are an integral part of the fire strategy for any building, designed to protect the occupants by maintaining compartmentation, essential to those who require speedy evacuation in the event of a fire,” continues Bob.  “Properly installed and maintained, a fire door will hold back fire and smoke from 30 minutes to more than four hours.  As demonstrated in these tragic cases, these extra minutes can be lifesaving.”

Nor is this a new problem.  In 2013, BRE undertook an investigation into fire/smoke doors recently installed in eleven residential tower blocks owned by Stoke on Trent City Council.  66 doors (a random sample of 10% of the total) were subjected to very detailed examination, which included removal of architraves, hinges, locks and other components.  This revealed that not one of the sampled doors had been adequately installed, to the extent that they would, in all probability, have failed to perform in a fire.

“Fire doors can be subject to much wear and tear during their lifetime,” concludes Bob.  “For this reason, it is essential that they are properly and regularly inspected and maintained by qualified professionals, with any necessary repairs carried out immediately.  We would also urge landlords and large housing providers such as local authorities and housing associations to be fully aware of their responsibilities: that their premises meet all fire safety requirements, are professionally maintained to provide protection in the event of a fire, and most importantly, keep their residents safe.”

The Lagos State Government has concluded plans to commence disbursement of bursaries and scholarships before the end of the month of December.

Special Adviser to the Governor on Education, Mr. Obafela Bank-Olemoh said Governor Akinwunmi Ambode had given approval for the disbursement, adding that it was in line with the continued commitment of his administration to ensure that Lagos State students continue to thrive and excel in the academic field.

“Our commitment to education across the sphere is unparalleled, but specifically, with regard to tertiary education, this administration over the past two and a half years has been deliberate about increasing the capacity of our institutions,” Bank-Olemoh said.

The Special Adviser said that despite the challenging economic situation across the country, Governor Ambode has continued to invest in a range of initiatives to upgrade the status of institutions in the State.

He recalled that in 2016, there was an increase in subvention for all the State’s tertiary institutions, while innovative programs such as Ready.Set.Work were launched to equip final year students with entrepreneurship and employability skills for the world of work.

Bank-Olemoh disclosed that to date, a total of 2,500 final year students have trained and exited into the workforce; and up 10,000 students in their penultimate year have participated in the Ready.Set.Work online program (www.readysetwork.com.ng), which qualifies them for the full-fledged program in their final year.

Besides, Bank-Olemoh added that the CodeLagos, a program aimed at teaching coding skills to one million Lagos residents, has entered its next phase, with centers opened across the State to train interested learners at no cost to them. 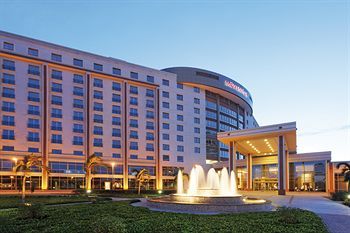 Accra, Ghana | Tuesday, 5th December 2017: Mövenpick Ambassador Hotel Accra (Mövenpick Hotels & Resorts), was recently crowned as a leader in ‘Hospitality’ at the first edition of the Ghana Expatriate Business Awards for its outstanding contributions, accomplishments and service towards the development of the hospitality sector in the country. The Award recognizes Mövenpick for its exceptionally high standards in product quality, increase in business activities, hotel service delivery and guest satisfaction.

The Ghana Expatriate Business Awards was instituted by the Ministry of Trade and Industry in partnership with Millennium Excellence Foundation to honor international businesses for their immense contributions towards economic development in Ghana. To be conducted as a biannual affair, the Awards recognizes the role and impact of expatriate-led businesses in enhancing local economic diversification efforts, raising the standard of living for locals and supporting job creation, while attracting foreign direct investments (FDIs) into the country.

Excited about the win, Axel Hauser, General Manager of the Mövenpick Ambassador Hotel Accra said: “We are truly humbled by the recognition accorded to us at this inaugural Ghana Expatriate Business Awards. Mövenpick Ambassador Hotel Accra takes pride in our commitment towards driving best practice in the hospitality sector in Ghana and we are pleased to have been acknowledged as leaders in the Hospitality category. Our employees have continuously demonstrated a passion for service excellence and we proudly accept this award on their behalf and thank them for their contributions.”

The hotel industry in Ghana employs about 500,000 people, consisting mainly of the youth, and promotes the modernization of the country by giving a platform to foreign visitors to form their first impressions about the country. A recent report by PWC’s Hospitality Outlook 2017-2021, suggests that the Ghanaian hotel industry is expected to grow 1.1% in 2017, 2.1% in 2018 and 2.3% in 2019. As a major emerging market in Africa, the study highlights that investors are increasingly eyeing opportunities in Ghana. The country continues to attract local and international brands to the country, including within the hospitality sector.

“Ghana’s hospitality industry is set to profit from increased foreign investments and an influx of foreign travelers as the government embarks on a number of initiatives to stimulate economic growth. As the industry continues to grow, novel avenues continue to emerge for investment along the hospitality and tourism value chain.” Mr. Hauser added.

The awards were attended by high-level government dignitaries, Ghanaian and expatriate business leaders, and members of the media.

Earlier this year, Mövenpick was bestowed with its sixth consecutive Green Globe Certification as the Hotel worked towards achieving its sustainable goals. The Hotel is one of the most established properties in the upscale hotel sector in Ghana as it has accommodated a series of impressive events namely Ghana Shippers Awards 2017, Innovation Prize for Africa 2017, The Golden Movie Awards Africa 2017, West Africa Media Excellence Awards (WAMECA), Media Foundation for West Africa’s (MFWA), and Glitz Style Awards 2017 among others.