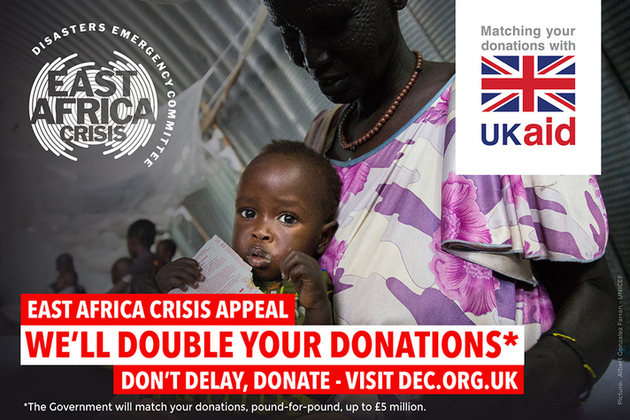 “By working together, we are making people’s generous donations go even further, and getting food, water and emergency healthcare to more people across East Africa who desperately need it.

“We have acted quickly and decisively to stop people dying of hunger – the international community must follow Global Britain’s lead and step up before it’s too late.”

The UK Government matched pound for pound the first £5 million donated by the public to the Disasters Emergency Committee Appeal.

The Disasters Emergency Committee brings together 13 leading UK aid agencies to raise money at times of humanitarian crisis in poorer countries. By working together we can raise more money to save lives and rebuild shattered communities.

The Executive Vice Chairman of the Nigerian Communications Commission (NCC) , Prof. Umar Danbatta Wednesday said the Commission and the Central Bank of Nigeria (CBN) prevented the planned takeover of mobile telecoms firm, Etisalat Nigeria, by a consortium of Nigerian banks over a $1.72 billion (about N541.8 billion) loan crisis.
Prof. Danbatta, who disclosed this at a conference shortly after the opening of the NCC’S Year of Consumer which was held at its headquarters in Abuja, said as part of the Commission’s strategic partnership, intervened in the matter to save the industry from a major calamity.
The EVC, said the NCC and the CBN had scheduled another meeting for next week among the major actors, adding that shareholders would also be involved in the talks to ensure an amicable resolution of the matter.
According Danbatta, “at this point, let me assure you that there is no cause for alarm regarding the matter; the regulators are on top of the situation and details of the resolution would be made available within the next couple of weeks.”
“The NCC and the CBN have to intervene regarding this issue, particularly in a manner that will not disturb the business operations of all the parties involved and in the larger interest of the nation’s economy,”

Danbatta said that NCC intends to inform and educate consumers with the aim of protecting and empowering them to make the right decisions, adding that a robust media programme would accompany the initiatives in campaign through the year providing unique and timely information to all.
“That is why in 2017, and I dare say and even beyond, the consumer will be our focus.
“The NCC is mandated to monitor the quality of service and ensure it conforms to acceptable standard.
“A management decision that compelled us to seek to amplify our activities toward ensuring that the consumer enjoys a customer experience that is enhanced and consistent in time and quality.
“We must remember that these consumers together have made all the success stories speak about in the telecom industry today,” Danbatta stated.
On his part the Minister of Communication, Adebayo Shittu, called on Nigerians to adopt made in Nigeria software, saying effort must be made to protect local industries and local software developers.
He added that the ministry was working on formulating cogent policies, frameworks and guidelines on protecting ICT consumers.
“The major issues of telecom consumers include drop calls on the rise due to customer base management; delay in hooking up calls due to congestion arising from possible obsolete equipment and maintenance; power interruption; Network coverage issues and enforcement challenges. Our goal is to find balance between consumer rights and right to privacy,” he said.
Mr. Shittu said the government was increasing its adoption of ICT to provide better response to the citizens’ demands and improve service delivery to make administration more efficient.
The high point of the event was the unveiling of Ali Nuhu, an actor and producer popularly known as King of Kannywood of Hausa movies, and Helen Paul, a broadcaster and stand-up comedian, as the “Face of the Nigerian Telecom Consumer”

SOAS to formally welcome His Imperial Majesty, The Ọọ̀ni of Ifẹ̀

His Imperial Majesty became the Ọọ̀ni’rìsà of Ilé- Ifẹ̀, the Àrólé Odùduwà and Spiritual Father of all Yorùbá people across the world in December 2015. Also Chancellor of the University of Nigeria Nsukka, His Imperial Majesty the Ọọ̀ni of Ifẹ̀ will discuss with Baroness Amos opportunities for partnerships with SOAS, the University of Nigeria Nsukka and other universities in Nigeria.

In his role as Chancellor, His Imperial Majesty the Ọọ̀ni of Ifẹ̀ is seeking to develop higher education in Nigeria. He is particularly interested in SOAS’s rich history on the study of Africa and the current programmes and research taking place on the continent and specifically Nigeria.

Baroness Amos said: “SOAS has a long history in research and teaching in African studies. We look forward to welcoming His Imperial Majesty to SOAS and having the opportunity to discuss the potential for collaborations between SOAS and the University of Nigeria Nsukka.”

His Imperial Majesty will also receive a tour of the Brunei Gallery at 4pm, which is currently exhibiting Embroidered Tales and Woven Dreams, a collection of traditionally embroidered textiles found along the Silk Road. The visit to SOAS will form part of His Imperial Majesty’s Commonwealth tour this month.

His Imperial Majesty Oba Adéyeyè Enitan Ògúnwùsì (Òjàjà II) will be accompanied by a large party of officials. After the formation of the Department of African Languages and Cultures, SOAS introduced ‘Africa’ to its name in 1938. Early scholars include Alice Werner who taught Swahili and Bantu languages and Professor Roland Oliver who played a pivotal role in establishing African history as a distinct field of scholarship.

SOAS is now home to the world-leading Centre for African Studies (CAS) and hosts the Royal African Society (RAS) with an active programme of research and teaching, and public lectures, seminars, events and conferences.

Upcoming major SOAS events with CAS and RAS include the Africa Development Forum on energy in Africa (18 March); a special lecture at Fort Hare university in South Africa (29 March); a conference in Egypt on the Role of African States in supporting arbitration (3 April); a major conference on the legacies of the Nigeria-Biafra war (21 April); and an inaugural SOAS Africa Conference (20-21 July) to mark SOAS’s centenary.

SOAS will also be hosting a special centenary celebration event in Lagos on 27 April, with Nobel Prize winner, Wole Soyinka, attending. Students from Nigeria as well as those with Nigerian heritage make up an important part of the SOAS student body, including England International Rugby player, Maro Itoje, who is in his third year as an undergraduate at SOAS.